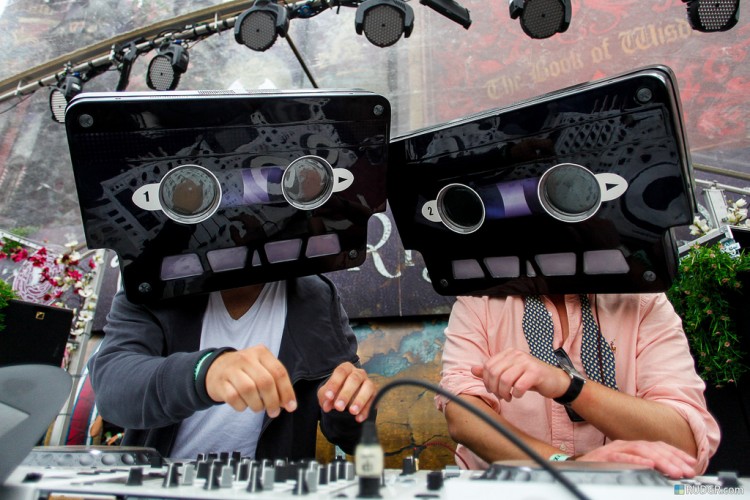 Not all artists are after fame and money. Some celebrities like to hide their true identities because they don’t want to put up their private life on a show for paparazzi. Although it also creates a sense of mystery and adds a spark to their charm when they come dressed in elaborate masks on stage.

While Lady Gaga is known for ostentatious and bizarre costumes, there are a few celebrities and music artists who like to hide behind a mask when they perform on stage. Here are their true identities revealed.

First on top is Marshmello who became an overnight sensation with his incredible talent and eye-catching marshmallow mask. There have been a few fake revelations by Marshmello; one time it was Will Ferell, the other it was Shawn Mendes. Though there have been speculations that Marshmello is an alias of Chris Comstock a.k.a DJ Dotcom. There is even a proof of him being the real Marshmello, when Skrillex did an on-air interview with Yahoo in 2015. He got a call from a guy named Chrismid-session to which he responded ‘Oh! Marshmello’ before he could put him off the speaker.

Deadmau5 is a well-known DJ from Canada who has a bizarre fascination with the mouse. Whenever he gets on stage to perform, you will always find him in a mouse mask and every time in different styles, colors, and even sizes. Though he has not been clandestine from the crowd every time. He has made a few appearances where he took off his mask during some of his performances. The huge tattoos of video games and anime reveal his true identity as Joel Zimmerman.

Slipknot is an American heavy metal band who managed to stay hidden behind their masks for many years before they finally revealed their identities. The reason behind hiding their faces was to drive away from the public attention and get intimate with their music. The idea was suggested by one of the band members who wore a mask to their rehearsals before the concept was added to their stage image.

Everyone’s familiar with Daft Punk’s futuristic metal mask and classy suits. That’s what makes them cooler besides their music. It is funny because the duo has not always hidden from the crowd. It was after they rose to initial success, they incorporated the whole ensemble as a part of their act. The duo was formed in the 1990s and their real names are Guy-Manuel de Homem-Christo and Thomas Bangalter.

How does this Swedish DJ duo get any music made behind their huge cassette masks is way beyond my understanding! However, they do bring a new level of fashion and uniqueness on the stage with their giant cassette gears. This, apart from the dope music they create always works as a huge crowd puller. They go by Alexander Björklund and Sebastian Furrer on all their IDs, just by the way.

If you have ever come across Youtube videos of a guy wearing a white theatrical mask and bucket on his head while he performs music, then know that it’s Buckethead. He has a funny story behind his ensemble that goes like: he was raised by chickens and one day the chickens scratched his face-off, but it didn’t really matter to him. That just meant he got to wear a mask everyday like on Halloween. However, it is not just an act, but also an agenda. The performer goes around the world informing the public about the terrible things people do to his feathered-friends in fast-food restaurants around the world. The real name of the chicken guy is Brian Patrick Caroll who has a fanbase worldwide.

Also read: 11 Bizarre Architecture Around The World That Prove Man Is A Genius

Remember Banksy? The most controversial artist of our times who turned the world upside down with his striking graffiti? It has been 20 years since his graffiti stint, yet his identity still remains unknown. Though his fans believe that his real identity is Robin Gunningham after a photo of him with graffiti supplies right beside his graffiti “Boy of a Lifebuoy” surfaced online. The man also orchestrated the shredding of his own painting at Sotheby that made the whole world gasp. Although the joke is on him when the buyer doubled the price making his shredded painting even more desirable.