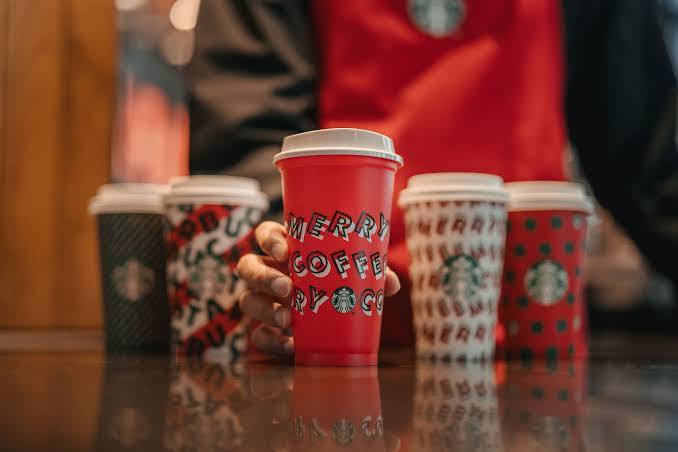 Starbucks has released this year’s holiday cup designs for US and Canada and it has taken the Internet by storm. Almost half a million people googled about it in the first six hours of the announcement, and the number has been mounting.

There are four brand-new holiday designs along with a free festive eco-friendly reusable cup, and the biggest news is that the festive flavours of Starbucks have come back so much earlier this year. Christmas is still seven weeks away.

We dug in to find what’s so special about the new Starbucks cups of this year. Here are the holiday cup designs, the quoted text with them is the official statement from Starbucks about their cups.

The traditional Starbucks red cup dotted with green, with the Siren logo playfully popping in here and there.

A lively pairing of red and green letters jazzing up a snowy white cup with a joyful expression.

From a distance, this cup looks like it’s wrapped in green vintage wrapping paper. But up close, its tiny type offers a happy sentiment.

The colors of the holiday all come together with this design as the Starbucks wordmark falls like snow against stripes of candy cane red and white.

The reusable cup has been extremely popular in the last years, and gets sold out quickly. Customers this year are too excited as they have begun rushing to their nearest Starbucks to grab one of these as soon as they can.

What about the holiday flavours of this year?

Starbucks has also brought out their festive menu for the beverages:

Festive food menu for Starbucks is also back, which includes:

Starbucks cups have had a history of controversy

In 2015, Donald Trump proposed a boycott for Starbucks after they had released a minimalist red cup. Conservatives argued that it had no festive touches, and therefore it was offensive to Christians.

In 2016, Starbucks came back with thirteen different red cups designs which were created by its own customers. This time Starbucks compensated for last year, and there were so many different Christmas-themed motifs on all the cups.

In 2017, Starbucks gave a chance for customers to show their own creativity by coloring their own cups. This was again met with criticism and hopeless rants by some killjoy people who just needed a reason to lash out.

While some other homophobes took issue with the fact that the featured image like two women holding hands.

Anyway, Starbucks is hopeful this year:

This year there are four new cup designs that evoke mini moments of joy for our customers and partners – it’s fun, festive and uniquely Starbucks.