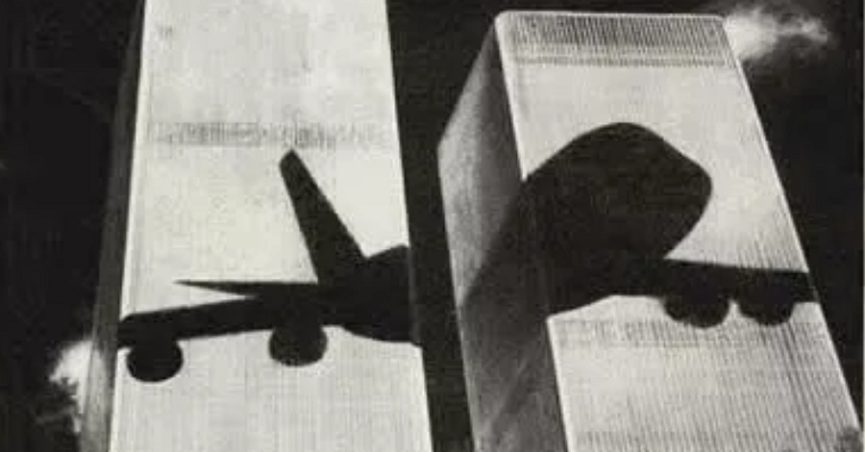 There have been constant theories floating around the internet ever since the attack of 9/11. Conspiracies of “jet fuel” aside, there have been rumours about which films and shows and books actually predicted the 9/11 event – much before it happened, in some cases the haunting predictions were made even two decades before!

But this scene from a 1997 episode of Simpsons? A magazine cover with the image of most recognizable building in New York? Just a wacky coincidence.

Illuminati has already been infamous in pop culture, often leading to hilarious conspiracy theories. But this particular card game was startlingly accurate as it showed the attacks on Twin Towers and the Pentagon – both of which happened on 9/11.

The book title translates into “This is How Latin America Suffers” but it contains the picture of exploding twin towers and people falling out of the towers. It’s hard to get the symbolism here, perhaps a putrid fantasy or a premonition of the things to come?

In 1993, Super Mario Brothers game was adapted into a movie that showed the twin towers being struck by an airliner. The adaptation was terrible, and that spooky scene is why everyone still remembers this movie – well, at least once a year.

In the early 2001, there was released a simulator game where airplanes would fly towards world trade center and you had to shoot them down.

Spinoff of X-Files, The Lone Gunmen had a pilot episode whose whole plot was about an airplane crashing into the world trade center. Again, it aired in same year – 2001!

This 1979 advertisement by Pakistan International Airlines shows a gigantic, looming shadow of an airplane silhouetted against the twin towers. The page itself looks like a haunted spawn of pulp magazines and noir films – and it doesn’t help the case that it looks like a literal foreshadowing of the event that happened 22 years later.

American hip-hop band The Coup were about to release their album Party Music, in September 2001. And their album cover showed the Twin Towers being blown to smithereens in rocking explosions! This is too remarkable and too terrifying of a co-incidence, and eventually The Coup changed their album cover and released it much later.

Nosebleed was an action-comedy movie by Jackie Chan, scheduled to be released in 2001, but it got cancelled because the plot was about an attack on World Trade Center. Here are some lines from the movie – terrifying and ironical, yet profound:

An article by VICE magazine in 1994 showed Beavis and Butthead as Al Qaeda operatives, crashing airplanes into the twin towers. Eerie?

Johnny Bravo aired this episode on 27th April, 2001 with the picture of an exploding tower in one of the frames that said: “Coming Soon.” Apparently, disaster followed soon indeed.

In a superman comics published in 2001, there was the plot of alien attack on Earth, and one of the pages showed the shattered twin towers. DC Comics were aghast after the 9/11 attacks due to spooky similarities but the comics turned out to be a bestselling one, and is now considered a collector’s item – albeit a cursed one. And now it’s hard, almost impossible, to find this comics on the open market.

Why do people believe in these “predictions”?

Famous astronomer and science author Carl Sagan wrote in his book The Demon-Haunted World, something about premonitions and such prophecies. The crux of which was that we have bad feelings all the time, people predict disasters all the time, movies are always showing buildings getting blown up – but we only remember what actually happens. This tendency of people is called selection bias.

Since the inception of Hollywood and Comic books, we have seen the picturization and imagination of world ending in millions of ways. Michael Bay has blown up thousands of buildings, he also blew up the World Trade Center in Armageddon – but we remember only the movies and shows which talked about World Trade Center. Everything else – we just forget like a bad dream or a thrilling piece of imagination.