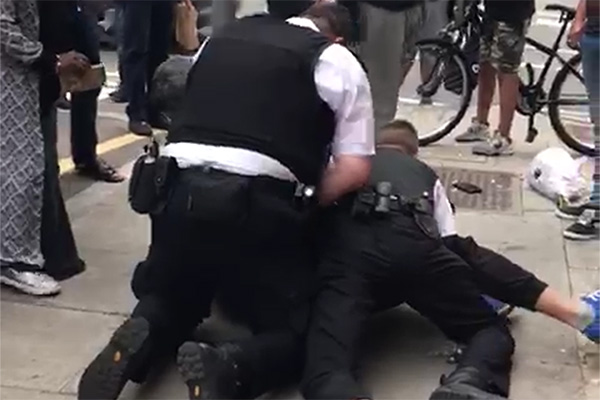 A cop enters a house, opens the door from outside, and yells, “Your door’s open!” Then he proceeds to choke the 16-year old teen who was in the house. The police officer didn’t have a warrant, and after assaulting and arresting the kid, he didn’t press any charges.

Another one in the series of unchecked and unmitigated police brutalities, the police officers of Carpentersville, Illinois were caught on home security camera of the teen’s house:

In the video, the cop opens the door and then claims that it was already open. Then he further investigates the kid, inquiring the whereabouts of a girl who went missing earlier. Reports said that police officers had visited twice at the boy’s home, each time in the absence of his parents.

To the officers, the boy replies, “Ah! Yeah, sir, I don’t feel comfortable opening this door without my parents here, sir.”

Cops choked the teen, and arrested him without charges:

Then one of the officers grabs the him by the throat, chokes him, pins him down on the couch like he was some kind of dangerous criminal.

The officer continued to choke the kid and then he had to tell them that they were being recorded, the dumbfounded officers immediately started looking for the cameras and then to justify their actions – they arrested the kid.

They showed up every time the parents weren’t home:

The officers had come to his house the day before as well, when his mother wasn’t home, The kid’s brother called his mom and that’s when she inquired the police about the reasons and whether they had a warrant. The officers hung up and left the premises. They returned next day, again when the teen’s mother wasn’t present, and proceeded with violence against the minor.

The family has sued the police department of Carpentersville for false imprisonment, emotional distress, and illegal search.

According to reports, the police have been looking for a girl who went missing earlier and was seen going to the kid’s home. He says he called an Uber for her to go home, but the girl didn’t reach home. That’s when police sprung into investigation where they ended up engaging in unlawful behavior.

The story was picked up by Washington Post, Now This, and then went viral via the reddit thread r/PublicFreakout.

Police officer without warrant enters house and chokes a 16 year old. from PublicFreakout

Police brutalities against minorities and marginalized people in US are nothing new. There have been countless previous incidents of police engaging in unprovoked attacks – many a times shooting a black person just because they had something that looked like a gun, despite the law that carrying firearms is legal in most states of US. This time they just assaulted a minor because of a mere suspicion, without litigation.