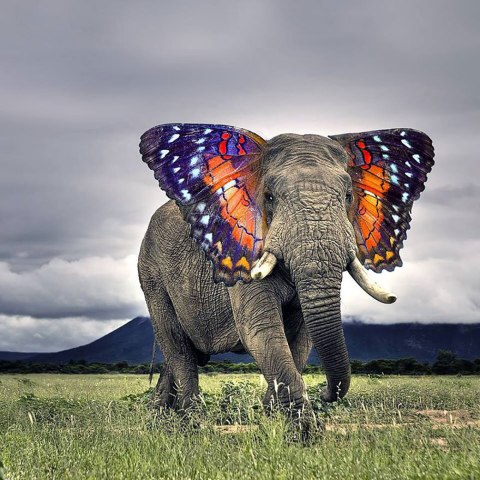 While nature has produced most marvelous of creatures, there is a greater power that can create beings too awesome and too cool for reality. That greater power is called Photoshop and it’s wielded by the Photoshop wizards on the Internet.

Here are 25 hybrid creatures of Photoshop, that should exist in reality but they don’t. Because they really are too cool for the mundane world.

It’ll kill you twice. First with that cuteness, then with those hunting claws.

A tiny bird with a shark jaw, can fly and maul you anywhere you are.

How fast can you run, dear human? This stuff is made of nightmares.

Dird is the official name of this creature, according to Know Your Meme. It’s adorable as heck.

The majestic beast with iridescent butterfly wings for ears? Sign me up for a trip to their planet.

Hippopotamouse is the only type of mouse that can actually bell the cat. It’ll happen soon. You’ll get to hear tale of it.

Teeny weeny birds with terrifying canines? Bless your luck that they don’t exist.

A hairy pony + otter. Will destroy your horcruxes and steal your fish.

A beautiful green parrodile. Parrot body and crocodile head. Every other bird who cares about its eggs, is happy that the parrodile is not a real thing.

Imagine a leather tank that got mighty wings of the golden eagle. It can swoop at you with the speed of 320 kph.

Also read: 8 animals that are faster than the Cheetah

Cutest animal that can kick a lion to death with those ostrich legs. Finally the rabbit gets some defense mechanism.

Beelion’s sting or bite, either of those will hurt like hell. Bees are already terrifying as fuck when they are angry, let’s rejoice that they don’t have lion heads.

Imagine a gigantic elephant with a thick nope rope for the trunk. It would be able to create a unique sound by mixing trumpeting and hissing. *shudders*

This will be the last thing people would see before the toothy leather tank slams them to their deaths.