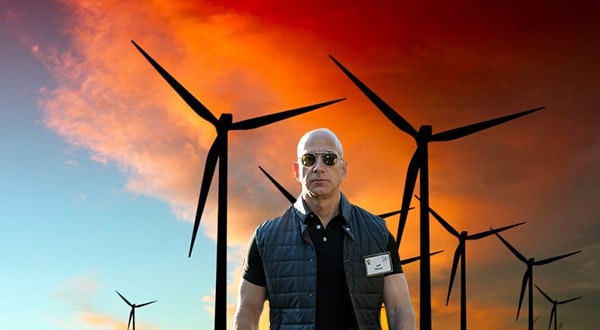 Jeff Bezos, the CEO of Amazon, who currently hoards a net worth of $129 billion – has just announced that he’ll donate $10 billion to fight climate change.

On Monday, Bezos made a post on Instagram where he said that he is creating “Bezos Earth Fund” that will finance “scientists, activists, NGOs – any effort that offers a real possibility to help preserve and protect the natural world.”

Today, I’m thrilled to announce I am launching the Bezos Earth Fund.??? ??? Climate change is the biggest threat to our planet. I want to work alongside others both to amplify known ways and to explore new ways of fighting the devastating impact of climate change on this planet we all share. This global initiative will fund scientists, activists, NGOs — any effort that offers a real possibility to help preserve and protect the natural world. We can save Earth. It’s going to take collective action from big companies, small companies, nation states, global organizations, and individuals. ??? ??? I’m committing $10 billion to start and will begin issuing grants this summer. Earth is the one thing we all have in common — let’s protect it, together.??? ??? – Jeff

Billionaires always invest in “pro-environment” projects, but why doesn’t it work?

Let it be known that Bezos has already invested in Breakthrough Energy Ventures – a fund where billionaires make investments into the crumbling environment in the name of supporting technologies that have a scope of making more money by selling products and services.

An apt example of this would be a kickstarter project funded by billionaires and multi-millionaires – the project aims to create products that helps people survive the climate change with hotter temperatures and polluted air, while the investors’ own projects keep contaminating the environment.

Even though Breakthrough Energy Ventures is aimed to support projects for reducing fossil fuels and carbon emissions, deforestation and unethical excavation is also run by the same companies who are funding the anti-climate change venture.

People are exposing the hypocrisy of Amazon CEO

Ironically, just a month ago in January, Amazon had threatened to fire employees who made an organization called Amazon Employees For Climate Justice.

Many people are questioning Jeff Bezos’ motives, considering that:

Jeff Bezos is giving $10 billion from his “personal wealth”?

Jeff Bezos is being lauded for making this contribution from his “personal wealth” but many people do not realize that Jeff Bezos has paid zero federal taxes since 2018 despite gaining $29 billion ever since.

In fact, Amazon made the Chicago city pass a bill for personal income tax diversion – in which taxes paid by Amazon employees to the city, an amount of $1.32 billion, were given from the government to Amazon. Essentially, it was an act of employees paying income taxes to their own company.

Point to be noted is that since $1.32 billion of income taxes were not used in any public welfare or infrastructure schemes but were just added to Jeff Bezos’ personal wealth.

He also cut the medical benefits of 2000 employees from Whole Foods – to save just a $9 million which Jeff Bezos earns in a mere 39 minutes.

To help the fight against fires in Australia, he gave $690,000 which is his income for 3 minutes. In comparison, Metallica gave $750,000 and Kylie Jenner gave $1 million after being bullied on the internet to do so.

Will it help the environment?

It’s unlikely that Jeff Bezos’ investment will bring about any good, since the inventions and ideas still need government approval and implementation. In last 4 years of Republican rule, US has reversed 95 environment regulations, giving rise to coal and oil industries which release lethal amounts of pollution into the atmosphere and water.