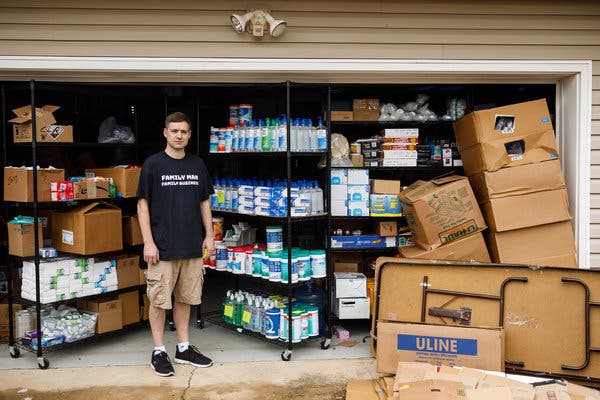 As the coronavirus spreads like wildfire through the world, with the current number of cases mounting up to 174,085 and 6,684 people dying the most painful and tragic deaths – panic and paranoia have taken control of people’s minds.

In USA, people have started stockpiling toilet papers, hand sanitizers, and face masks to the extent that they are found nowhere in the market. Some sellers have taken advantage of this – and made $30,000 – $50,000 within just a week by selling these products.

Brothers Matt Colvin and Noah Colvin heard of the first coronavirus death, and they immediately began hoarding hand sanitizers. They drove around from Dollar Tree to Walmart to Staples to Home Depot, and cleaned out the shelves.

Then Noah Colvin took a 1300-mile trip to Kentucky, and brought thousands of bottles of hand sanitizers and bundles of anti-bacterial wipes from all the big and small shops that he could find.

Eventually, they ended up with nearly 18,000 bottles of hand sanitizers.

The tried selling them at 20 times the normal price

Then, both of them started listinng their products on Amazon and sold them at prices ranging from $8 to $70. They sold 300 bottles immediately, all of which they had bought for $3.50 each.

They thought this was crazy money, but people started accusing them of hoarding in the times of crisis.

..and got banned by Amazon and EBay

Finally, Amazon pulled his items and banned him along with many other sellers who were selling their products at extremely high prices.

Ebay followed suit, and went as far as banning the sales of masks and sanitizers in US.

Now, as the panic spreads and people keep searching for sanitizers in their desperation – Colvins were sitting with 17,700 bottles of sanitizers with no way to sell them.

Matt Colvin says he was really looking forward to putting his family in a really good place financially, and now he is wondering “what the heck am I going to do with all of this?”

Thousands of sellers have been doing this

Colvin is not the only one hoarding sanitary materials, there have been thousands of sellers who have bought this stuff and just waited for the right time to engage in price gouging. Amazon said that they have recently banned hundreds of sellers their listings for selling overpriced products.

Many such companies such as Ebay and Walmart have followed in Amazon’s footsteps, and banned sellers who were trying to make an unwarranted profit.

But who is going to talk about the hypocrisy of Amazon and American hospitals?

However, this step from large online stores does not come without their own hypocrisy thrown in. They have been chastising sellers for gouging, but they have also taken 15% of all the profits made by the sellers.

While Amazon and Walmart have banned sellers for price gouging, but these companies themselves have engaged in excessive price gouging – charging twice or thrice the usual price that you’d pay in normal times.

American healthcare system rears its ugly face again, where hospitals have been charging $700 for things as simple as a saline bag.

Mikeala Kozlowski, a nurse in Dudley, Mass., gave birth to her child and then she has been looking for sanitizers everywhere and can’t find it anywhere for less than $50.

“You’re being selfish, hoarding resources for your own personal gain,” she said to the sellers.

Interestingly, in capitalist America, the hospitals or corporations always hoard up things but are never brought into scrutiny like these independent sellers.

In the end, he donated all the sanitizers to charity

Matt Colvin has been defending his actions, saying that the increased prices also include the “value of his labour” –

Just because it cost me $2 in the store doesn’t mean it’s not going to cost me $16 to get it to your door.

Eventually, he decided to donate all the bottles of sanitizers to charity.

I’m not looking to be in a situation where I make the front page of the news for being that guy who hoarded 20,000 bottles of sanitizer that I’m selling for 20 times what they cost me.