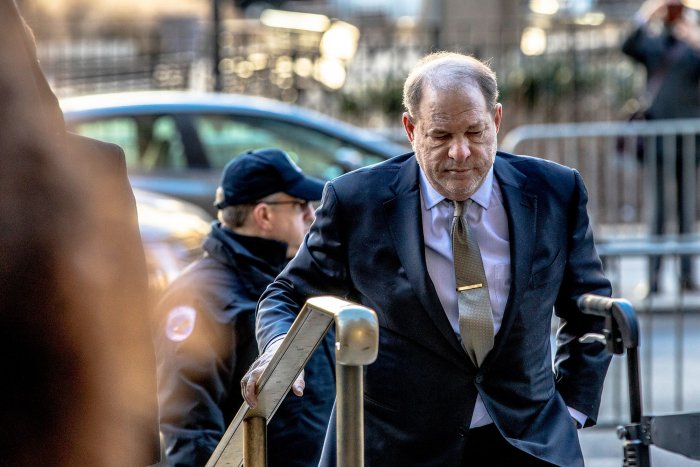 Seems like the evil deeds of Harvey Weinstein have finally caught up to him – first he was sentenced for 23 years in prison, and now he has caught the lethal coronavirus.

Harvey Weinstein, who is 68 years old, and suffers from several ailments such as chest pain and heart disease – has a very low chance of surviving this.

According to a report by the local newspaper The Niagra Gazette, two inmates from New York’s Wende Correctional Facility were tested positive for coronavirus.

Harvey Weinstein was hospitalized earlier this month, after reporting severe chest pains, and now he is one of the inmates to have been infected by the coronavirus.

Now, he is being kept isolated.

It is said that he was already infected even before he got transferred from the Rikers Island prison where he was jailed until last Wednesday.

Michael Powers, the president of New York State Correctional Officers and Police Benevolent Association, said that the federal healthcare privacy law prevents him from disclosing any such information about the inmates.

However, it is confirmed that two out of the 961 inmates are tested positive and one of them is Harvey Weinstein, as cited by officials who chose to be anonymous due to legal repercussions.

While confirming that Harvey is indeed infected by Coronavirus, they said they were not authorized by the law to publicly comment on this issue.

Prison officers in charge of Harvey have also been tested positive

Three correctional officers have also been tested positive, and thousands of other officers are kept under observation.

The Correctional Facility has suspended all the visits to prison inmates – in order to counter and control the spread of the deadly virus.

There is no better breeding ground for this virus than a closed environment such as a correctional facility.

He assaulted over 100 women. Is Coronavirus better for him than a 23-year jail term?

Several people have commented that Harvey has an extremely low chance of survival, and his death will be an easy release for his crimes as compared to the 23-year prison sentence he was given two weeks ago.

Harvey Weinstein, while being reported by many facilities as the “Oscar-winning producer” and “fallen movie moghul” – is a Hollywood rapist who assaulted more than 100 women and derailed their careers after they refused to cooperate with him and called him out.

He even convinced his friends such as Lord of the Rings director Peter Jackson to not give an acting chance to any of the actresses who went against Harvey.