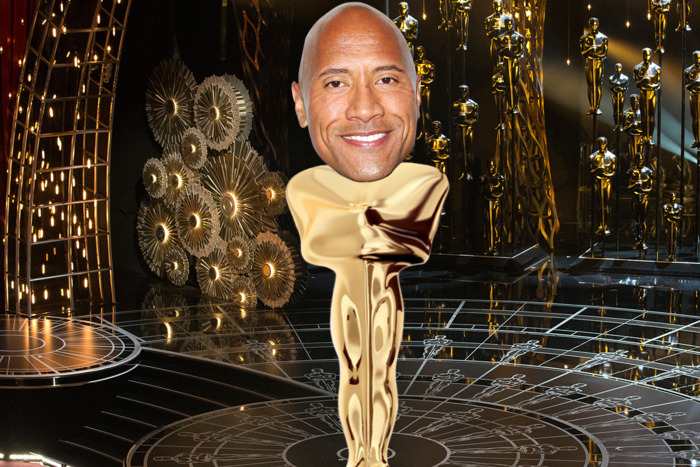 Given the fact that the Oscars this year will be without a host; news about how Dwayne Johnson may have been the host, is sending the world into a tizzy.

Yes. The crowd’s favourite confirmed on twitter that initially the Academy had chosen him as this year’s potential Oscar host. Sadly though, due to preoccupations with shooting Jumanji 2, Dwayne declined the offer. It’s funny in a way now, because, had it been Dwayne Johnson in Kevin Hart’s place, we would have had an Oscars host this time.

Kevin Hart, the infamous American comedian and actor was the official Oscars host for 2019. All was well until a group of people on twitter dug out the skeletons in his closet. Hart’s anti-gay Tweets from 9 years ago surfaced and he was forced to step down from his position as the official Oscar host.

Something that saddened both the Academy and him. Apparently, they asked him to issue a public apology for his anti-gay statements; which Kevin refused to do for quite a while. Kevin claimed that the entire ruckus was created by people who were jealous of him.

Apparently different celebrities will be taking positions on stage to transition from one segment of the Oscar night, to the next. They will be doing so as the academy has decided to go on without a host. As reported by Variety, the 91st Academy Awards would be the first in 30 years to proceed without an emcee.

The entire commotion over how the host-crisis at the Oscars could have been avoided, started with a tweet from Dan Buffa. He went on to say, “If the Academy is so inclined to line up a great host for next year’s Oscars, just pick @TheRock”

Ah mahalo dude, I was their first choice to host this year, and my goal was to make it the most fun and entertaining Oscars ever. We all tried hard, but couldn’t make it work since I’m shooting Jumanji. Academy and I were super bummed but maybe one day down the road ? https://t.co/eiiMuBNOzb

The Jumanji actor was quick to respond to Dan regarding this. He said, “Ah mahalo dude, I was their first choice to host this year, and my goal was to make it the most fun and entertaining Oscars ever. We all tried hard, but couldn’t make it work since I’m shooting Jumanji. Academy and I were super bummed but maybe one day down the road ..”

Well, indeed the whole world is looking forward to an Oscars hosted by you Dwayne.

Johnson is currently working on his new Disney film venture, Jungle Cruise. He will be seen opposite the Mary Poppins sensation, Emily Blunt. The film is slated for release in the year 2020. Meanwhile, production in full swing. The movie is about a love story between protagonists Frank and Lily. Well, with a guy as awesome as Dwayne Johnson alongside the enigmatic Emily Blunt, the movie will definitely be one to watch out for.

For the past four months we’ve been puttin’ in the hard work filming DISNEY’S JUNGLE CRUISE. This image reflects the genuine love, laughs and my big mouth that is our daily DNA. My incomparable co-star, Emily Blunt and our brilliant & passionate Spanish filmmaker, Jaume Collet-Serra @jcolletserra. Feels like we’re making something pretty cool, exciting and fun for the world to enjoy. The adventure of a lifetime.. #ALittleDittyAboutFrankAndLily #Disney #JUNGLECRUISE ? ????

Speaking of catching that charisma of his as a host, maybe, down the line someday; or even next year; we may see some Dwayne-somness live on stage at the Oscars. Until then, there’s only hopeful wishing.