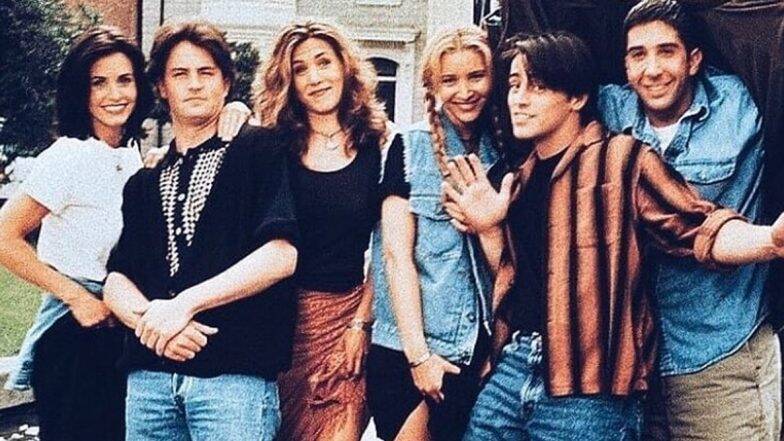 Our beloved show FRIENDS has turned 25 and Google is celebrating it much more than anyone else. Earlier, Google planted easter eggs related to each Friends character for you to find. And also added a Glossary of Friends terms with their meanings: phalange, whoopah, Unagi, and so many more.

We have compiled here a list of all such Friends terms, with their definitions, all in one place:

(adjective) One of 11 varieties of towels, along with ‘Everyday use’.  Not to be confused with ‘Fancy’ or ‘Guest’ towels.

Fancy guest towel is supposed to be used only when the Queen comes over. Maybe not even then.

(noun) Two individuals, not necessarily related, who have identical hands.

It’s a miraculous phenomena that can help you become a millionaire. It’s a gift, and when you have it, you have to do something with it. Can you imagine what money people would pay to see the hand, TWICE? It’s a million dollar idea!

Also referred as mmm.. noodle soup. Not to be confused with tomato soup which is called just mmm.. soup.

One of the long and impressive words you can use in front of friends and colleagues to sound more photosynthesis.

A non-existent part of a plane that is not even found in any airplane. Also a surname of a woman from the French town of Este Lauder, also a surname for a business woman who was in Vegas for business – coincidentally, both were named Regina Phalange.

(noun) Perspiration following consumption of large quantities of meat, such as an entire turkey.

To avoid meat sweats, wear special thanksgiving pants borrowed from any of your friends who have been pregnant before, they might have one of those.

(noun) The capital city of Peru, not to be confused with Lima.

What?! Everyday you learn something new.

(noun) Animals that link claws and mate for life.

Although, they may occasionally go on a break.

(noun) A place to do some thinking.

The meaning of the box is threefold:

(noun) A lump or protrusion in the neck formed by the angle of thyroid cartilage surrounding the larynx, if your name is Joey.

“For the last time, it is not named after each individual man,” that’s what Chandler Bing said. Well, Bing disagrees with Google. Old news.

What’s not to like? Custard, good. Jam, good. Meat, goooood!

Or if you want to get into more trouble, ask Rachel.

(noun) A friend of Santa’s who can teach you about all the holidays.

But also, if Holiday Armadillo stayed in the same room with Santa for too long, the universe will implode.

(verb) The act of rotating a large object, such as a couch, to traverse a narrow and winding passage, such as the stairwell of a New York apartment building.

Usually followed by “Shut up! Shut up! SHUT UP!”

(noun) Rekindling a friendship, sometimes by way of a cross-country roadtrip.

Phoebe and Joey have continuously outdone each other in inventing words. Can you count and tell us who won? The answer is really surprising. 😉

Don’t worry, if today you don’t even have a pla. It’ll be okay. It’s all gonna come together and it’s just gonna be unfloopy.

(adverb) The method of counting in which the word ‘Mississippi’ is said between each number.
Also look up: mississipilessly. Counting mississipily can lead you to performing the play of The Ebony and The Ivory all by yourself.

(noun) 1. A state of total awareness 2. Freshwater eel
If you leave now and go to a Sushi place, you can Unagi in about half hour.

(noun) It’s like a cow’s opinion.  It just doesn’t matter. It’s moo.
It’ll make sense if you’ve been living with Joey for too long.

(noun) It’s not even a word.
People working in data reconfiguration and processing might get confused as Transponsters. We may never know why.

(exclamation) The sound of a whip.
You know, like whipped … WOOPAH!
Featured Image Courtesy: Latestly