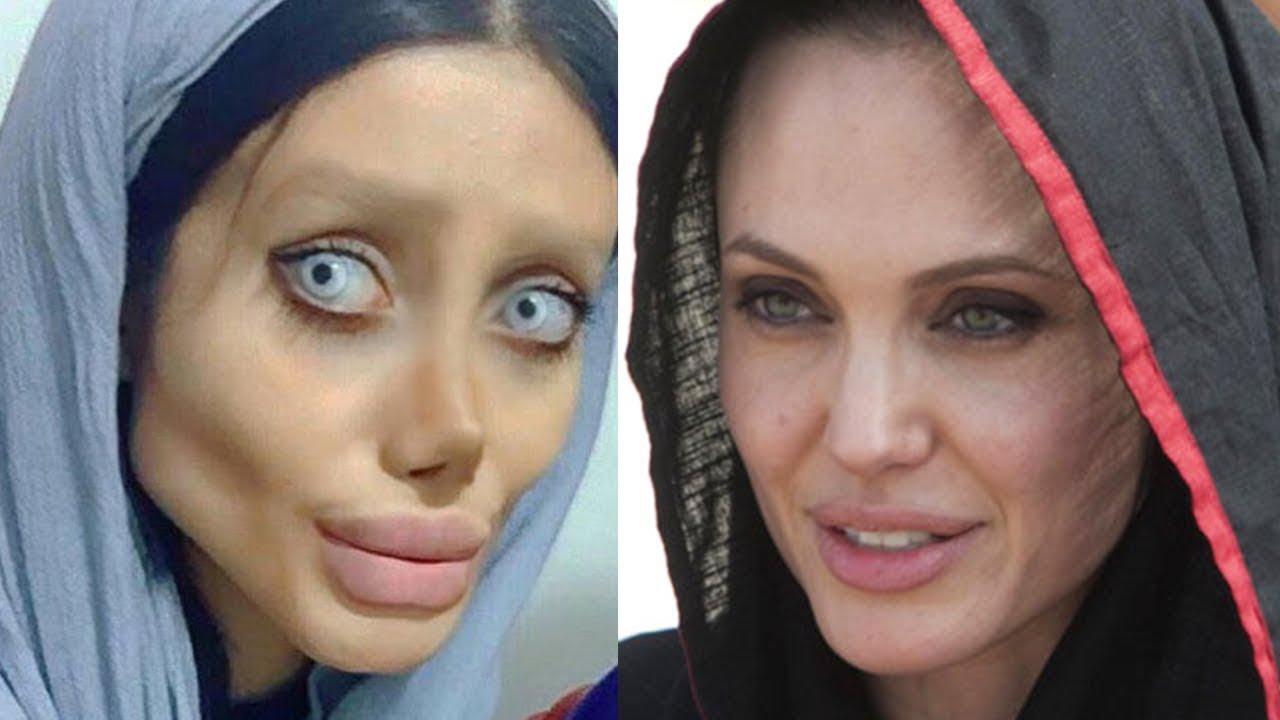 Remember the Angelina Jolie lookalike model, who had gone viral in the past for her unique Angelina-like look with a gothic twist and a zombie element thrown in?

She is a 22-year old Iranian Instagram model, named Sahar Tabar. She gained fame and followers by shocking people with the revelation that she has gone through 50 cosmetic surgeries to look like Angelina Jolie, and then she started positng pictures of her haunting look with sunken cheeks, oversized pout, and a cartoon-ish nose that seemed to jump straight out of Corpse Bride.

Now, she got arrested by the Islamic Police of Iran

According to a report by the news agency Tasnim, her arrest followed after some people complained against her. Talk about people not being able to mind their own business.

Tehran has a guidance court, which ordered Sahar’s arrest on the basis of “committing cultural crimes, social and moral corruption of the youth.” She has been charged with blasphemy, inciting violence, gaining income through inappropriate means, and encouraging youths to corruption, and insulting the country’s dress code.

Islamic police of Iran has been notorious for unleashed hell in the life of common citizens, arresting and torturing people for having fun, and even killing them for doing smallest of the things which are considered blasphemous according to the Islamic law.

Most social media influencers, mostly women, have been arrested in last few days. Many of them are arrested for doing something like showing their hair on Instagram.

There is a sudden outcry and public mockery of the authorities happening over the social media in Iran. Many people have slammed the country’s legal code, while someone tweeted saying that Sahar should have done fraud and murder, because that would be considered less evil than a woman having a mind of her own, according to the Islamic code.

What’s the story behind her controversial look?

As her photos kept getting viral, many people suspected that the whole story behind this might not be entirely true. All the rumours of 50 plastic surgeries were discredited by Sahar herself later on. She said that the look was actually created with clever makeup and heavy digital editing.

Later she posted side-by-side images of her real face and her ‘Angelina’ face, and cleared it up that she never wanted to look like Angelina or the Corpse Bride.

In some of her pictures she even looked extremely thin, giving rise to rumours that she weighed only 88lbs to mimic Angelina’s physique.

Everything was clever makeup and Photoshop

That was also a clever trick of Photoshop, and if you observe then you would see that none of the two photos exactly match each other – since every time Sahar experimented with different kind of makeups.

It is Photoshop and makeup. Every time I publish a photo I make my face more fun. It is my way of self-expression, a kind of art.

“My followers know that this is not my real face,” she added.

I had no interest at all to be like Angelina Jolie, and I did not want to look like the character from ‘Corpse Bride’.

She is probably sent to the Evin Prison, the black hole of evil

However, there are no certain reports of where she is kept but there is a high chance that she might have been taken to the Evin prison outside Tehran. Former inmates of that prison report horrors of extreme torture, repeated rapes, and electrocution, and thousands of executions that take place inside the prison.

To think of it, all of this is done in the name of maintaining “good moral values” in society, where a woman showing her hair is a crime and for that, the “moral police” rapes her in prison and that is considered perfectly acceptable in the twisted moral fabric of Islamic law.