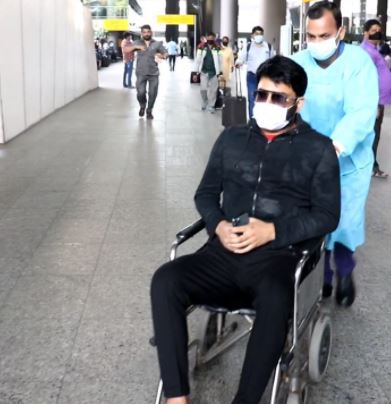 Besides his wit and aced comedy, Kapil is quite popular for his anger issues and abusive behavior. From being involved in a hideous fight with his close friend Sunil Grover to his abusive texts to a journalist, we all have witnessed the madness of Kapil’s anger in public.

This time Kapil was no different his rude behavior with the paparazzi was caught on camera when they spotted him at the airport. His anger resurfaced and he got involved in controversy yet again.

It is being said that the comedian has got himself injured (the reason for the injury is still unknown). As the paparazzi started clicking his pictures, Kapil got furious as he was not in a mood to get clicked but papz continued to cross his path while he was being taken away in a wheelchair, Kapil Sharma snapped at the reporters, rudely asked them to get away from him, and called them ‘Ullu Ke Patthey.’

Some people criticized Kapil for his arrogance. “His this attitude also depressed him before, now is also the same bad time that is coming again for him,” commented one user. However, there were many people who supported Kapil and rather criticized the paparazzi for invading his personal space. “Ek toh irritate khud kar rahe ho. And I can’t even hear this. Guys have no manners at all. Bas pics se Matlab hai insan se nahi and na hi ushk health se. Why do you guys forget basic civic sense? Bas pagal ki tarah pic lete rahe,” commented one user. And there were others who asked photographers to respect someone’s privacy.

Kapil Sharma and wife Ginni Chatrath have welcomed their second child, a baby boy on February 1. “Namaskaar, we are blessed with a Baby boy this early morning, by the grace of God Baby n Mother both r fine, thank you so much for all the love, blessings n prayers … love you all … Ginni n Kapil #gratitude,” Kapil tweeted. The couple has a daughter, Anayra.

On the work front, Kapil is all set to make his digital debut, although it is unclear at the moment if the project is a comedy special, series, or film. “I am super excited for my first-ever association with Netflix. 2020 has been a bumpy ride for everyone around the world and my motive is to make people forget their worries and welcome this new year with love, laughter, and positivity. I always wanted to be on the streaming giant but I didn’t have their number. It’s a project close to my heart and I cannot wait to share more details with my fans soon,” he said.