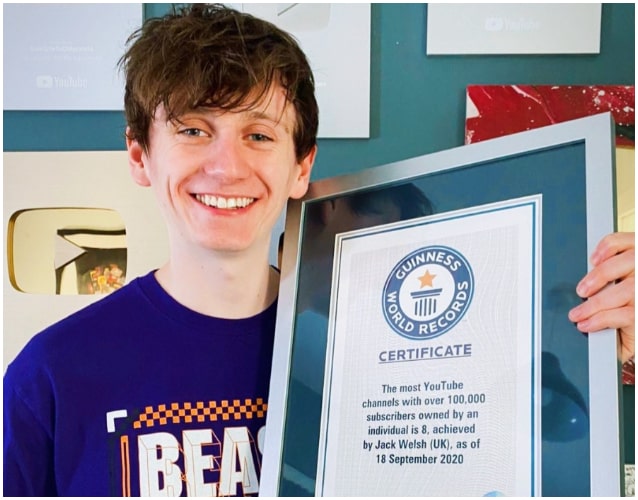 We all just love video content, so what could be a better platform than YouTube to explore and even create content. We often see various YouTubers creating videos to make a mark in their respective niche but surprisingly there is a breed of content creators who don’t believe in putting all their eggs in one basket and English YouTuber Jack Welsh is one such content creator.

The Guy With Most Number of Successful YouTube Channels

Jack Welsh got his name registered in Guinness World Records for having the most YouTube channels with 100K+ subscribers. Jack has nine such successful YouTube channels.

The eligibility criteria for this record states that the claimant must be over the age of 16. All the channels must be launched, operated and owned by the claimant with no other person playing an eminent role. Additionally, a minimum of five published videos on each channel must have 50K+ views.

Earlier Jack set a record of having eight 100K+ subscribers in September 2020 and it took him a few more months to grow such a subscriber base on his latest channel ‘JackSucksAtClips’.

Who is Jack Welsh?

Jack Massey Welsh isn’t just about making and breaking YouTube records. He is best known for his channel ‘JackSucksAtLife’. The channel currently has 1.63 million subscribers where he uploads the popular game Minecraft-centric content.

On Friday Guinness World Records tweeted to congratulate the young content creator saying, “Congratulations to @JackMasseyWelsh who has smashed his own record for the individual with the most YouTube channels with over 100k subscribers – 9!

“Jack first set this record with eight back in September 2020 and his latest channel to reach 100k is JackSucksAtClips,” the tweet further stated.