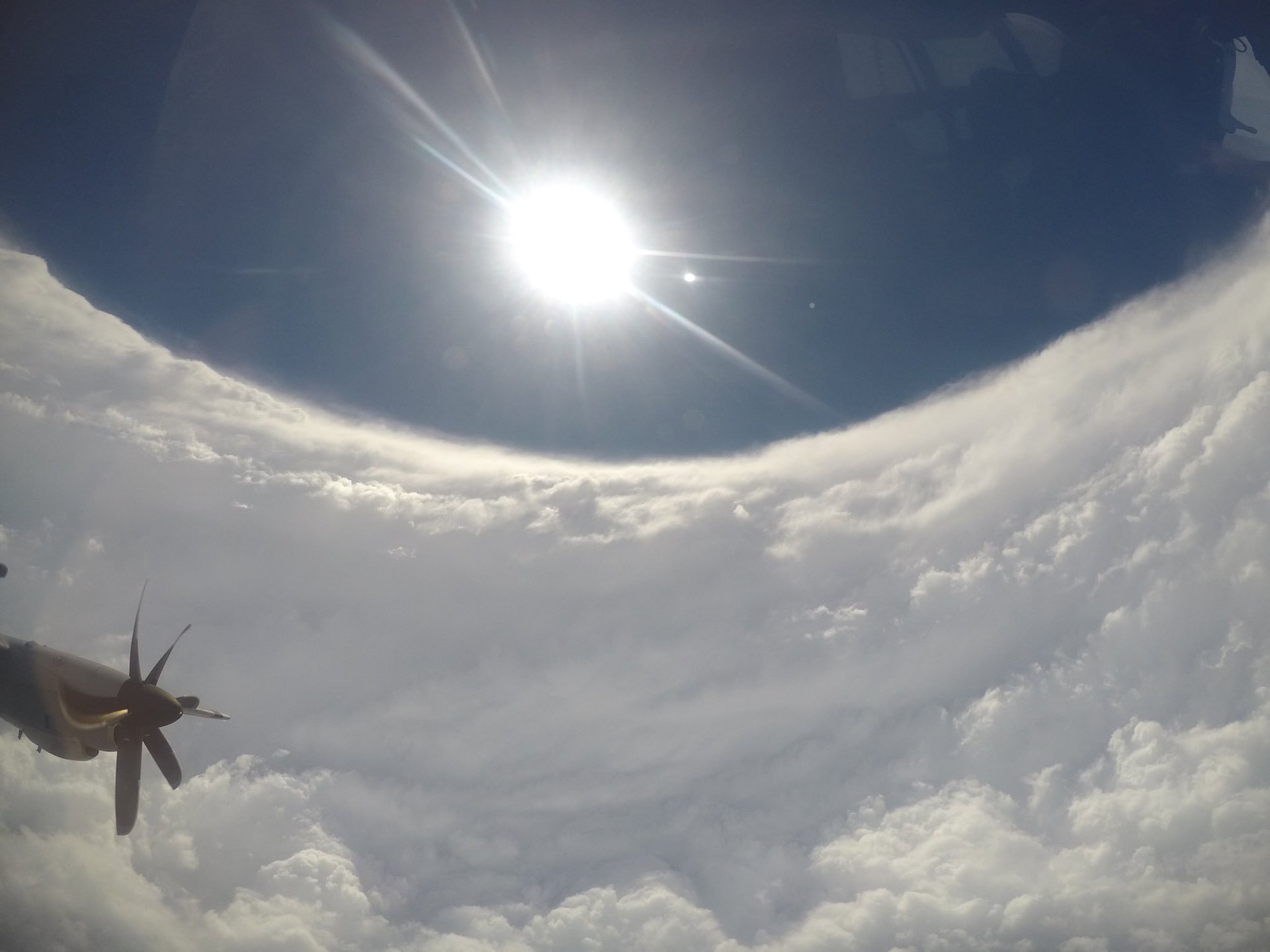 In an adventure that could be called amazingly daring and incredibly crazy, Hurricane Hunters of the NOAA plunged with their aircraft into the Hurricane Dorian. Garrett Black, the meteorologist aboard the flight, clicked this picture and shared it on twitter.

In the photo you can see towering walls of fluffy white clouds on all sides of the plane, with clear blue sky and a shining sun in the center. While winds blew at 220 mph (354 kph) in the area surrounding the storm, the eye of the storm was strangely quiet and peaceful.

Terrifying video captured from inside the Eye of Hurricane

Garrett Black, the meteorologist aboard the aircraft said that the water exactly below the eye was calm, but there were large waves all around in the distance. He also added that the phenomenon of towering clouds is called the Stadium effect:

We had the giant cumulus towers surrounding us that gave us the same effect it felt like we were sitting in the center of a football stadium.

Lt. Col. Sean Cross of the 53rd Weather Reconnaissance Squadron, who was piloting the aircraft through the thunderstorm, commented:

It’s actually incredible to see what mother nature has created from the inside in what I call belly of the beast. To be up and close and personal with a hurricane that’s this powerful.

A purple thunderstorm means the hurricane is getting stronger

There was also captured a haunting footage of purple lightning as seen from a nighttime flight of the Hurricane Hunters.

Unbelievable footage from the Hurricane Hunters of #lightning inside of Hurricane #Dorian. I can't imaging what it's like to pilot that plane. pic.twitter.com/a6LQwI8V4k

Dakota Smith, who works at at the US National Center for Atmospheric Research, said that lightning flashing regularly in the eyewall of the hurricane is a dangerous sign

Lightning in the eyewall does normally signify deep convection. This usually means the storm is maintaining or increasing in strength.

That is a badass photo shot. I have so much respect for the Air Force pilots, who risk their lives to keep us all safe. Thank you for your service.

I have concerns. I get that flying around inside the eye is calm and serene but how did you get in there? How do you plan on getting out?

Second-most powerful hurricane ever recorded in the Atlantic Ocean

The pictures released from International Space Station show the terrifying strength and span of the hurricane. According to meteorologist Philip Klotzbach, Dorian is the second strongest Atlantic hurricane since 1950.

It was observed that Dorian has been lashing over Bahamas where it caused severe catastrophe. As of now, it is reported to be moving towards south eastern United States – triggering a state of emergency in Florida, Georgia and Carolina. More than one million people are put under mandatory evacuation. People are unwilling and hesitant to leave, especially the seniors from the retirement homes in Florida.

In the picture, Tricia Cheshire, a resident of the Amelia islands is seen sunbathing for the last few minutes before storms hit the coast.