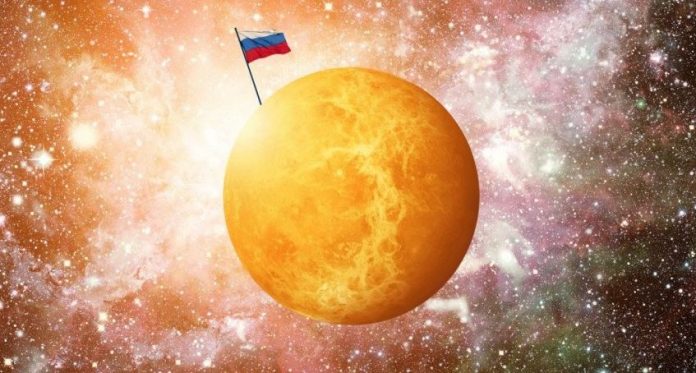 The cold war between the USA and Russia has been going for a while now, and now it has also escalated into a turf war in space. After some potential scuffles regarding the ownership of land on Moon, they have now moved to fighting over the ownership of Venus.

American corporate media and politicians have freaked out after Russians just claimed that “Venus is a Russian planet.”

Signs of life found on Venus, is this why Russia is claiming to own the planet?

Some people have said that Russia is saying this only after it was discovered that there is a possibility of life on Venus. Recently, a unique and strange gas named Phosphine was discovered in the high clouds of Venus, and that could be a strong indicator of existing life since Phosphine can only be produced by living things.

But Russia denies both the claims. They said that this is not the reason why they are laying claim to the ownership of the planet, and that there is no life on Venus.

Dmitry Rozogin, chief of the Russian space agency “Roscosmos” just claimed that Russians own the Venus, and his comment has now sparked controversy all over the world.

He was addressing the 2020 HeliRussia exhibition where he claimed that Russian scientists have proved that life on Venus is not possible.

Russians have done fine work on Venus, but does that mean they own it?

“Our country was the first and only one to successfully land on Venus,” Rogozin said. “The [Russian] spacecraft gathered information about the planet — it is like hell over there.”

That’s obviously true, because during the USSR era – Russians had landed numerous missions on Venus under the name “Venera.” Ten of these probes landed successfully on Venus, and the Russians were able to know a lot about Venus.

But all these probes didn’t survive for a longer than a few minutes, as the high pressures and extreme temperatures of Venus crushed the spacecrafts to dust.

The Moscow Times has also reported that Roscosmos will be launching an independent Russian expedition to Venus now, and that will be without any international cooperation.

It is common scientific belief that Venus was home to liquid water and had temperate climate for at least 3 billion years until as early as 700 million years ago. And during that time, some event triggered drastic changes that caused the release of carbon dioxide from soil into the air.