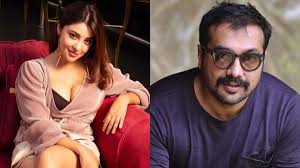 Actor Payal Ghosh has leveled charges against Bollywood Director Anurag Kashyap that he had allegedly forced himself on her. In an interview with news channel ABN Telugu, the actress recounted the incident claiming that Kashyap allegedly told her that ”she should not think of denying a big star like him”, as it would allegedly ”benefit her in the future”. The actress also alleged that Kashyap had threatened her to stay quiet about the incident, reminding her of “acid attacks” on women.

She also tagged Prime Minister Narendra Modi in her tweet and urged him to ‘take action’, adding that her ‘security is at risk’ 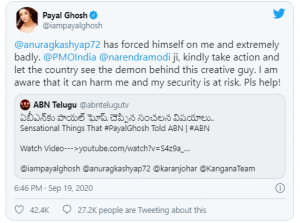 Here’s a detailed story of what actually happened with Payal

The ‘Patel Ki Punjabi Shaadi’ actress mentioned that she wanted to speak about this for a long time. But on Saturday, she finally got it off her head. She also stated that she tweeted about this incident sometime ago when the MeToo movement had happened, but many people advised her to delete the tweet else she would stop getting work. Her manager too urged her to remove the tweet which she did and post that, Anurag blocked her on WhatsApp she said.

Payal, who stays in Mumbai, says that she didn’t tell her parents before accusing Anurag in a video because they wouldn’t have allowed her to do so. “After the video went viral, they called and scolded me,” she revealed.

According to Payal, goes that she and Anurag were Facebook friends and the unpleasant incident she faced happened in her third meeting with Anurag at his residence at Yari Road. “The first time I met him was at his office in Aram Nagar, Versova. The second time I met him was at his residence. We spoke in general about films and the film industry. Then he called me again to his house and this time, that is on the third occasion, he tried to force himself upon me. I did not raise an alarm but pleaded with him that he should let me go as I would return again some other time,” Payal claimed. “After that, he texted me a few times asking me to come over. But I did not go,” adding, “We had decided to meet, yes. And it was I who wanted to meet Anurag. Actors and actresses have to meet filmmakers so that they get to know them. It is meant to acquire work. Else how would makers know about us?”

Women asked Ghosh to file an official complaint to the NCW 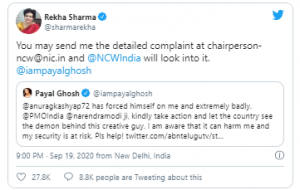 In response to her tweet, National Commission for Women chairperson Rekha Sharma asked Ghosh to file an official complaint to the NCW. 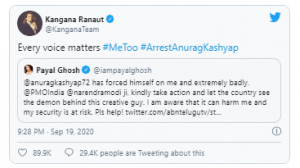 How did Anurag react?

Anurag along with 7 tread long tweets also, shared a press statement by his lawyer on the tweeter.