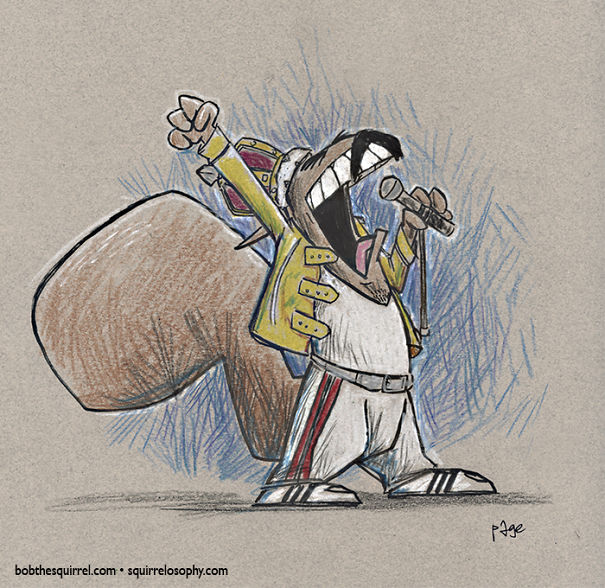 Cartoonist Frank Page has been drawing his daily comic strip Bob the Squirrel for over 17 years, and then he recently wondered “What would the famous musicians look like if they were squirrels?

So he drew the famous musicians from Bob Dylan to Ed Sheeran, and each and every one of them is just hilarious and obviously, adorable: All we can say that we do love the “shape of you” now that you are a squirrel, Sheeran. On another note, I had seen a squirrel in my backyard yesterday, she really looked like the cartoon above. But before I could take a picture, sheeran.

I’m not going to apologize for that. He will, he will, he will rock you. Sure he will. Although Freddie the Squirrel is quite smaller than the actual Freddie so he might just be able to pebble you. The flashy and flamboyant Elton John in his studded jackets and colourful shades, a sight to cherish, eh? So glad to see the Bob the Squirrel finally living the life he loves, as Bob Marley. As if the original Alice Cooper wasn’t spooky enough, now we have got two of him! The squirrel, the myth, the legend! Slash the Squirrel is back with his shocking head of hair and god-level skills on the string. Now that Snoop Dogg has turned into the Snoop Squirrel, he can finally get high in more than one ways – by climbing the tree, duh! You know what the first way is. You have seen his charismatic duckwalk in the electrifying concerts of AC/DC, and now can you imagine what his squirrel-walk will be like? This squirrel, apart from being the phenomenal guitarist of the rock band Queen, also has a PhD in Astrophysics from Imperial College, London. Impressive, isn’t it? This squirrel will jump from the tree, and tap on your window glass to say “I love you.” We come from the land of peanut and pistachio! From the perch of the trees, where filthy dogs bow-wow! Hey Mr. Tambourine Man, did you realize that the times they are a-changin’? Ye’re a squirrel now. Hello from the other side of the window, squirrel Adele! Why are you lurking here, did you lose your peanut or did it get lost rolling in the deep?

Thankfully, there was no Michael Jackson grabbing his nuts. Ouch.