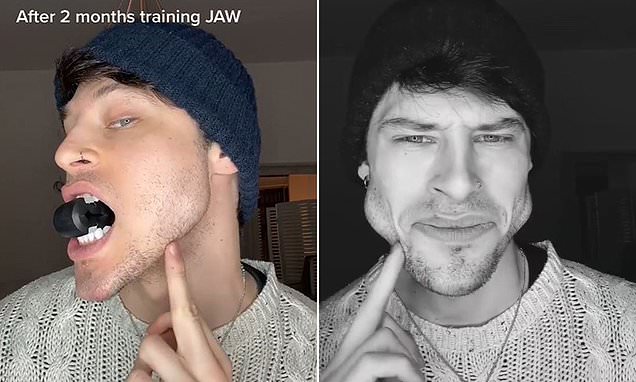 Having body transformation goals and achieving them isn’t a rare scenario these days and after all who doesn’t like a great jawline that comes with the package?

Luca Marchesi, an Italian model revealed the secret to his extremely chiseled jawline but many people including doctors responded that he has pushed it way too far.

Marchesi calls himself the “CEO of Jawline” and seeing his transformation it’s quite evident.

As per Luca, it took him 2 years of training to sculpt the jawline he flaunts and as he shared the dramatic transformation via a TikTok video. The video garnered millions of views as it showed Marchesi chomping down on a little rubber device that is used to strengthen the facial muscles.

The model captioned the video clip asking: “DO YOU THINK IS TOO MUCH?”, to which many viewers including doctors agreed.

How People See It?

Marchesi’s video received thousands of comments from other TikTokers as one stated that “This hurts to watch wtf.”

Another viewer commented: “A Little too much.”

A dentist/invisalign doctor, Dr Martine Hodgson shared her views saying: “Over-developed masseter muscles, whether unintentional through teeth clenching, grinding or deliberate, can cause problems such as migraines and TMJ or temporomandibular joint pain.

“These are the muscles that connect the jawbone to the cheekbone and help us to chew, so an over-development in this region is not advised.”

The pain is treatable, Dr Martina added, but you’d need several shots of Botox to “relax the muscles and then reduce inflammation”.

Among the  viewers, there were people who thought that it was a filter and were shocked to know that it wasn’t.

One of them asked: “Am I the only one who thought it’s pretty cute?”

Another commented: “Jawline sharper than my knife.”