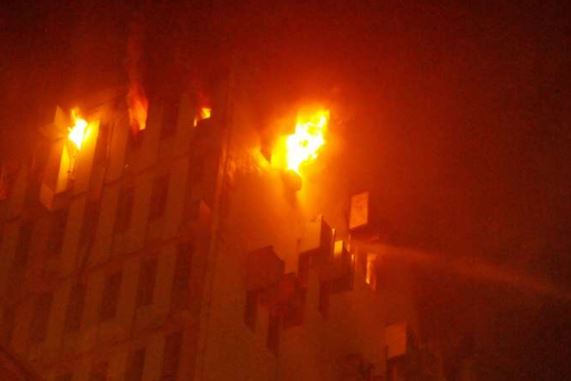 Nine people were killed in a huge fire that broke out in a 13-storied office building in central Kolkata’s Strand Road on Monday evening.

Fire tenders were pressed into service to extinguish the blaze at the building.

The fire which broke out on the 13th floor spread in the New Koilaghat building on Strand Road at around 6.10 pm, was cooled down soon after it occurred but the blaze caused the loss of lives along with property.

As per the latest report among the nine deceased, four were firemen, one was a police officer, a Railway officer, and a security person.

Five of the nine bodies were found in an elevator on the 12th floor. The victims seemed to have suffocated and burnt to death thereafter inside of the lift.

Railway Minister Piyush Goyal has expressed grief over the incident and ordered a high-level probe to ascertain the cause of the fire.

Taking to Twitter, he said, “Sincere condolences to the families of the 9 brave deceased including the 4 firefighters, 2 Railways personnel and an Assistant Sub Inspector of Police (ASI) who have been fighting the fire at the Eastern Railways Strand road office in Kolkata.”

He further added, “Railway officials including the General Manager are at the site and are working in coordination with the State government for rescue and relief efforts. We are committed to doing everything possible to ensure the safety of all concerned,” Piyush Goyal added.

Prime Minister Narendra Modi also mourned over the loss of lives due to the fire incident.

In a tweet, the prime minister said, “Saddened by the loss of lives due to the fire tragedy in Kolkata. In this hour of sadness, my thoughts are with the bereaved families. May the injured recover at the earliest.”

He also approved an ex-gratia of Rs 2 lakh each from PMNRF for the next of kin of those who have lost their lives due to the tragic fire in Kolkata, while Rs 50,000 would be given to those injured, the PMO said.

Chief Minister Mamata Banerjee visited the site and declared Rs 10 lakh compensation for the next of kin of the deceased.

The chief minister also allegedly claimed that no official from the Railway Department was present on the scene.

“The property belongs to the Railways but unfortunately I found no senior officer from the railway here, and we were not even provided a map of the old multi-storey office building.”

Banerjee also said: “I don’t want to do politics over the tragedy but no one from railways has come here.”

The building houses railway ticketing offices, and as per reports, online bookings have been hit with the power being switched off.

Fire Minister Sujit Bose said he was “pained” by the incident and a high-end inquiry will be ordered into why the elevator was used.