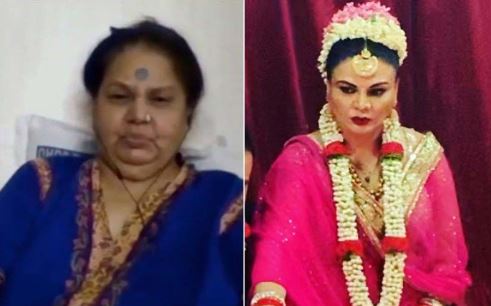 Rakhi Sawant has been leaving no stone unturned to entertain viewers and fans are loving her enthusiasm in the game. Ever since she entered Bigg Boss 14 as a challenger, she has been reiterating that she indeed married Ritesh, and she hasn’t lied about it for publicity. She said that she is hoping her husband would reveal his identity in public soon. Now, Rakhi Sawant’s mother, who is hospitalized, revealed that it is Ritesh who has been paying all her medical bills. She added that he will come on Bigg Boss 14 and accept her daughter Rakhi Sawant as his wife.

Jaya Sawant is all praise for her daughter Rakhi Sawant’s husband, Ritesh, and said that he has been taking care of her as she is hospitalized for a tumour in her abdomen. Rakhi is currently a part of Bigg Boss 14 and is unable to visit her mother in the hospital.

In an interview, Jaya said that Ritesh has promised her that he will come on Bigg Boss 14 and accept Rakhi as his wife. Ritesh, who married Rakhi in 2019, has kept his identity hidden from the public so far.

“Yes, Rakhi’s husband Ritesh is taking care of me and all the medical bills and everything. He is there for us. He is trying hard to come to India and I have asked him to come ahead and reveal his identity. He has assured me that he will come before the audience and accept Rakhi as his wife. He is a very good human being and I just want them to be together and happy in their married life,” Jaya told The Times of India.

“It was the helplessness of Ritesh and he didn’t want at that point of time to talk about his wedding. Now, he is ready to come in open and talk about their marriage. He will definitely come on Bigg Boss and accept her as his wife. He has promised me,” she added.

Meanwhile, a few days ago, Rakhi Sawant’s brother had informed media that their mother will undergo a major surgery, and that she has a tumour in her abdomen.