If you have kids at home, they you wouldn’t agree more that they’re more entertaining than anything else we’ve ever heard, said, or seen. There’s not a day that goes by when these growing humans infect the house with their innocent humor. Sometimes, so much that you will spend hours wondering where they’re getting these ideas from and how they fearlessly execute or say everything they think. Although, it is these moments that makes caring and raising children easier because it instantly de-stresses the mind. One thing’s for sure, if the kids and parents were both performing, it’s the kids who get to drop the mike with their wit and logic. And we have proof!

1. A carefree child who even learns on his own terms. We should all be more like this one, shouldn’t we?

2. Well, is this animal love? It’s taking over parent love, though! Poor parent

3. Now children only replicate what they see. Can we blame them?

4. Anything for a cookie, mom! There’s perfect logic in what the kid said. Don’t we always just have enough space in our stomach for what we WANT to eat?

5. OMG. What has this kid been watching? LOL!

6. Kids can go any length to prove their point. Look at what this girl did to prove she’s tough!

7. One cannot make up their mind if this kid is funny or a mirror of realization? The poor parent will live thinking they have a weird nose!

8. And how exactly does the kid know that the mom’s life is a train wreck? Ha ha!

9. Who said the world isn’t used to working or schooling online? Even ten-year-olds know how it works, or, maybe, how it doesn’t work! 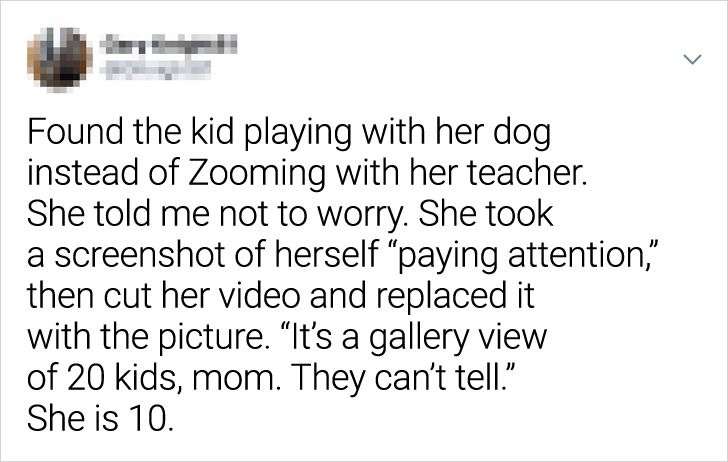 10. There’s no better way to learn that the parent needs to go dieting when the kid responds this way. They’re innocent, but also brutally honest.