18 Photos From Australia That Show How Terrifying The Situation...

Last year, we saw the devastating effects of the massive fires in the Amazon rainforest – but 2020 has been so much worse. Fires all over Australia cropped up, and they are SIX TIMES BIGGER than the Amazon fires of the previous year.

Not only that, the fires have killed more than 500 million animals – that is half a billion animal population burned and dead. Total burnt area in Australia is bigger than the size of Germany, and the smoke has covered an area that is twice the size of Europe.

With such destructive fires happening in Australia, and the World War 3 about to be started by USA, and India building concentration camps for Muslims as it passes NRC – a law similar to the Reich Citizenship Law of the NAZI Germany – it seems like the world is truly about to end.

Here are some of the most frightening and surreal photos from the burning Australia – and all of them really show us what the end of the world is going to be like:

#1. A smoke cloud that is 12km high, and produces fire tornadoes

A giant pyrocumulus cloud was formed out of the smokes rising from the fires. Now it is 12 km high, and it has started producing its own thunder and lightning, and it is starting to create multiple fire tornadoes with the wind speeds of 100 kph.

NASA’s satellites have been capturing data ever since the fires started, and the above picture shows a three-dimensional visual of how much of Australia is actually affected by the biggest fires in the recorded history.

#3. The State of Victoria, Australia as seen from a satellite

#4. Smoke spreading and covering the blue sky of Australian suburbs

As captured by an Australian citizen, who posted the photo on Instagram – it shows how surreal things have really become in Australia.

#5. Australian firefighter standing in the middle of a burning forest

#6. Half a billion animals have died in the fires

More than 500 million animals have either burned to death, or suffocated due to smoke, or died of hunger and death because they couldn’t find anything to eat or drink.

People have tried to save as many as they can.

#7. Wild animals are approaching humans and asking for help

It is a truly sad state of affair when thousands of animals have actually approached humans and asked for help. This viral image shows a kangaroo who was thirsty and dying of overheating when a boy gave him water to drink, and then drenched him in cool refreshing water.

#8. This orphaned baby Kangaroo was rescued from the fire

Some people found this baby Kangaroo all alone, without any parents around – and they brought her home, fed her, gave her water to drink, and wrapped her in a cozy blanket to comfort her from the trauma and shock.

#9. Red sky from the fires, there is no filter

The smoke from the fires and the dust from the storms has filled the sky so that the sunlight looks red all day long – an effection of maximum dispersion of light. The only planet to have a red sky is Venus, and that’s because its atmosphere is 90 times heavier than Earth’s, and it is full of Carbon Dioxide and Sulphuric Acid. If Earth’s sky becomes blood red, then you know this is the worst case scenario.

#10. Thousands of people stuck on a beach trapped between fire and ocean

As people evacuated their cities, thousands were forced to take shelter on the beaches of Australia and they had nowhere else to go. With fire covering the entire land, the sandy beach was their only refuge – and the only way to escape was to swim into the ocean. Thankfully they received help and were safely rescued.

A similar situation had happened in Japan in the year of 1923, where people were trapped on a beach like this and a fire tornado burned 38,000 people to death in just 15 minutes.

#11. This is how it is like to be trapped between fire and the ocean

Two little kids were photographed walking into the shallow water near the beach, in anticipation of fire coming towards them. All these kids and people with them were rescued, thankfully.

#12. This brave 11-year old girl driving a powerboat to escape the fire

This 11-year old girl named Finn piloted a powerboat to get away from the fire that was trapping people on the beach. Lot of people tried swimming or using rowboats or powerboats to escape.

#13. A man and a dog watch their village burn

A man and a dog found that not only their house but the entire village was engulfed in the fire, as they sat at a safe distance and watched their world burn – quite literally.

#14. A firefighter watching a hill on fire

A New Zealander from Auckland clicked this photo and shared on social media. While the sky in Australia is blood red, it looks the shades of yellow and orange in New Zealand that is 2600 kilometers away.

#16. View from this guy’s house who looks like John Lennon 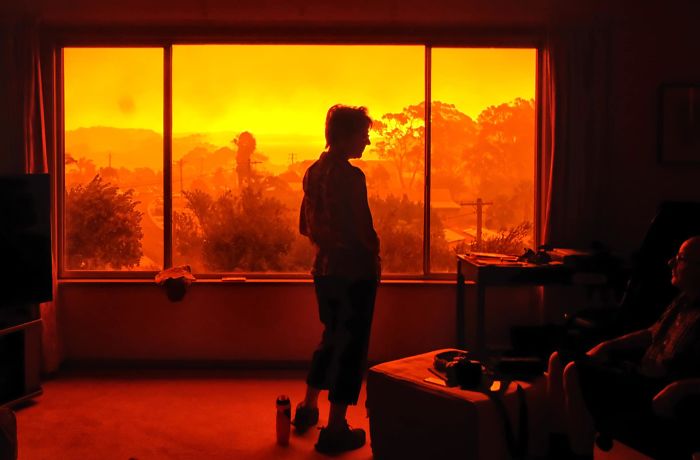 #17. This heartbreaking tweet describes what the firefighters are going through

I finally have 48 hours where I’m not permitted on a fireground. It’s bliss. My body isn’t coping with the comedown though. Headache, nausea, shakes.

#18. A bird comes back to her tree, but there is no trace left of her home here

After the fires have razed this lush forest to ash, this Kookaburra bird returns home when it’s safe. But there is no nest, no trees, nothing left anymore.

Also check: 19 Terrifying Pictures of the Fire in Amazon Rainforest