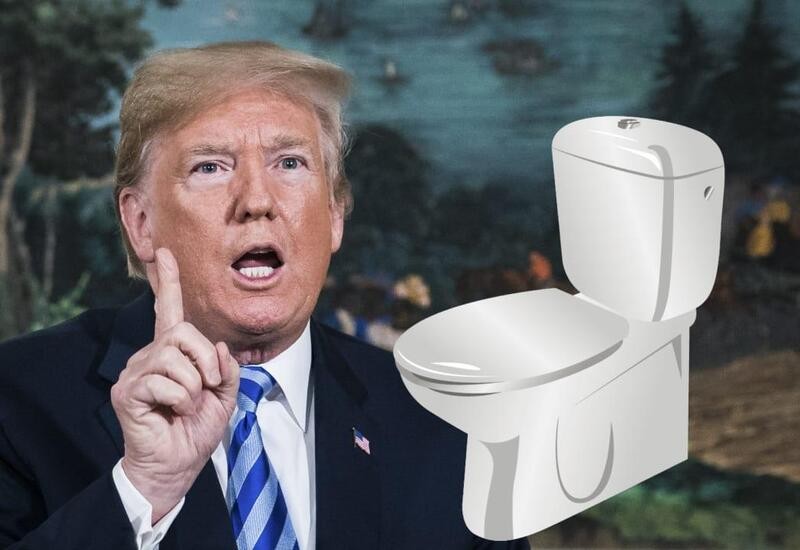 Donald Trump is nothing but a living meme, perhaps the biggest meme (or joke, if you will) of this decade. Now he has come up with a new idea and we are not sure whether it’s brilliant or pure madness.

US President Donald Trump is looking at American toilets and wants to review “sinks and showers and other elements of bathrooms across the country.”

He also wants to change all the lightbulbs because the new ones make him look “too orange”, and he doesn’t want that.

While most people are done within a single flush, or perhaps another one if needed. But Trump thinks that Americans flush their toilets 15 times and that needs to be changed. Bigger question is why does he think that people flush 15 times? Does he do that himself?

People are flushing toilets 10 times, 15 times as opposed to once. They end up using more water.

Trump said, and added that the Environmental Protection Agency is “looking at his suggestion.”

TRUMP wants to deregulate water systems: "We have a situation where we're looking very strongly at sinks & showers…where you turn the faucet on [&] you don't get any water. They take a shower & water comes dripping out…We are looking very seriously at opening up the standard" pic.twitter.com/VZpD1jXiND

“We have a situation where we’re looking very strongly at sinks and showers and other elements of bathrooms, where you turn the faucet on in areas where there’s tremendous amounts of water, where it rushes out to sea because you could never handle it. And you don’t get any water. You turn on the faucet and you don’t get any water,” President Trump said during the White House round-table conference.

On a serious note, 80% of America is going to face water crisis next year

Trump also said they will not be imposing controls everywhere, since there are desert areas where they’ll “go the other route” with their policies. But then he also said:

Environmental Protection Agency says that at least 40 states in the US will face water shortages in the upcoming year.

In a dig he took at former President Barack Obama, Trump said that White House would need to change the lightbulbs because the new bulbs make him look too orange. He blamed Obama for imposing energry efficiency requirements that caused to the installation of new bulbs.

The new bulb is many times more expensive, and, I hate to say it, it doesn’t make you look as good.

So now Trump is rolling back all the changes made during Obama administration to ensure energy efficiency in the White House and across America.

In another news, Trump wants to replace the Sun as well

Even the Sun makes him look orange, so does that mean Trump wants to change the Sun as well? But wouldn’t it be too hot to go near the Sun? Perhaps Trump would suggest that we go there in the night when the Sun is “turned off”.