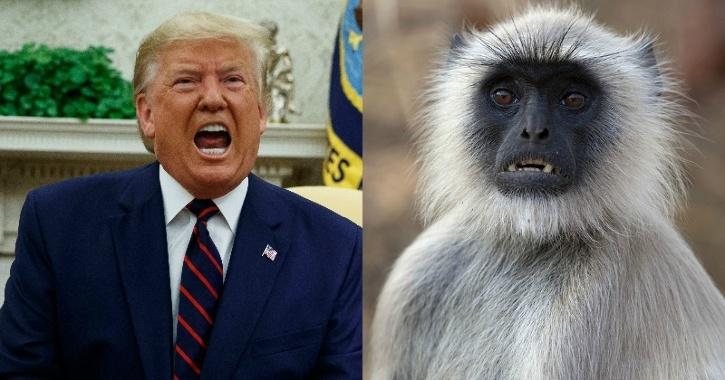 Donald Trump is on a trip to India, and as expected – insensitive controversies, drama, and hilarious things are happening.

First, the industrial city of Ahmedabad was the home of controversy where the officials built a wall around the urban slums to hide from from Trump; and then most of slum-dwellers were thrown out of their homes to “clear space” for Trump’s road show.

Then, Indian authorities dumped (wasted) a million gallons of clean and fresh water into the polluted river of Yamuna to remove the stink, and make it look clean when Trump was supposed to visit the Taj Mahal at the banks of said river.

But another thing has happened, that has been puzzling people from all over the world but it’s no surprise at all to the Indians. A team of five langurs (long-tailed Indian monkeys) have been added to Trump’s security team as he visited the Taj Mahal.

What are the langurs doing in Trump’s security team?

Taj Mahal is situated in the city of Agra, and it is infamous for its vicious monkey population which is quick to attack and ransack a stranger that comes into their territory. The monkeys are seen not only as a menace in the city, but they are quick and shifty and almost impossible to be tackled without violence.

These are the monkeys that might attack Donald Trump

The monkey menace in Agra is so severe that they have been infamous in the city for killing many human babies and old people by ganging up on them. These monkeys once attacked and injured some French tourists visiting Taj Mahal.

Trump’s security detail feared that a monkey attack might be expected, and they will not be able to protect Trump from the monkeys without using force.

How will Langur monkeys protect Trump?

Reports have come in that the Indian government has spent $12 million just for this particular section of Donald Trump and Melania Trump’s visit to the Taj Mahal that will last for just about three hours.