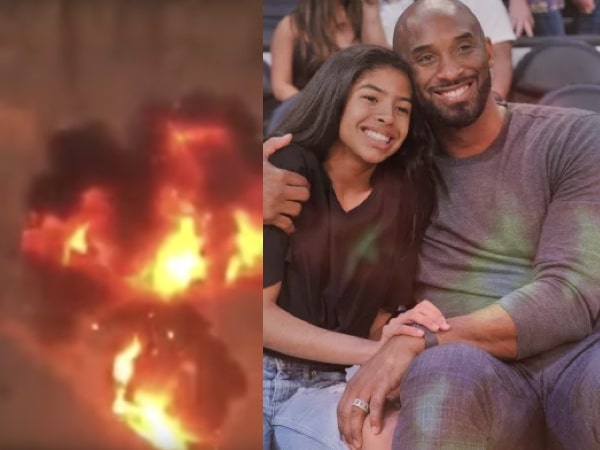 In a shocking and tragic event, Basketball legend Kobe Bryant and his 13-year old daughter were killed in a helicopter crash. According to LA Country Sheriff, the a total of nine people died in the horrific crash, and there were no survivors.

Reports say that the helicopter crash happened on a remote hillside in Southern California, and it is speculated that overcast sky and bad weather might be responsible for the fatal accident.

Kobe was travelling with his 13-year old daughter Gianna Bryant

Kobe was travelling with his daughter Gianna, 13, and both were going to an AAU basketball game. Gianna was an aspiring basketball star and her career was just getting started as she had begun to follow her father’s footsteps.

For the last two years, Bryant was helping in coaching his daughter’s team. Recently a video of the father-daughter duo talking at a game had gone viral on the Internet.

There has been an outpouring of grief for the passing of 41-year old Bryant, and his daughter whose career in basketball was tragically cut short.

Colin Storm, one of the witnesses of the crash, said that he heard the sound of “a low-flying airplane or helicopter”, and then he rushed out of his living room to see what it was.

It was very foggy so we couldn’t see anything. But then we heard some sputtering, and then a boom.

Then, as the fog cleared Colin could see smoke coming from the hillside.

Another witness named Juan Bonilla from Calabasas said he was working on his roof when he heard the sound of the helicopter. He thought it could be the sheriff’s helicopter. Juan said he didn’t hear any sound that indicated that there was something wrong with the helicopter’s engine or the rotors. According to Juan, visibility was fine at the time of the crash despite it being a foggy Sunday morning.

Video footage of the crash shows no survivors

After the crash, LA Fire Chief rushed with firefighters to the venue, and they had to put out the fire which had spread to almost quarter of an acre. They found no survivors.

Investigators have said they will check whether the crash was caused due to bad weather, dangerous terrain, radio towers or bird strikes.

Kobe Bryant had extraordinary records which established him as one of the all-time greatest players in basketball history – he had in his name five NBA championships, 18 NBA All-Star selections, two Olympic gold medals, an NBA MVP award, and he even won an Oscar for the film “Dear Basketball” – which was based on a love letter he had written to the game.

Tributes have poured in from celebrities and sports legends

Kobe was a legend on the court and just getting started in what would have been just as meaningful a second act. To lose Gianna is even more heartbreaking to us as parents. Michelle and I send love and prayers to Vanessa and the entire Bryant family on an unthinkable day.

Kobe Bryant, despite being one of the truly great basketball players of all time, was just getting started in life. He loved his family so much, and had such strong passion for the future. The loss of his beautiful daughter, Gianna, makes this moment even more devastating….

So sad to hear the heartbreaking news of the deaths of Kobe and his daughter Gianna. Kobe was a true legend and inspiration to so many. Sending my condolences to his family and friends and the families of all who lost their lives in the crash. RIP Legend? pic.twitter.com/qKb3oiDHxH

Kobe was truly larger than life, a legend. May he and all those who lost their lives today rest in peace. Love and condolences to his family. LA will never be the same.

It can't be. You always encouraged me mamba. Gave me me some of the best quotes that we smile about to this day.! Love you man!

My heart is in pieces hearing the news of this unimaginable tragedy. I can’t fathom what the families are going through. Kobe meant so much to me and to us all. Sending my prayers, love, and endless condolences to Vanessa and the family and anyone who lost someone on that flight.

There’s no words to express the pain I’m going through with this tragedy of losing my niece Gigi & my brother, my partner in winning championships, my dude and my homie. I love you and you will be missed. My condolences goes out to the Bryant family and the families of the other passengers on board. I’m sick right now.

Legend Michael Jordan who was an inspiration to Bryant

I loved Kobe – he was like a little brother to me. We used to talk often, and I will miss those conversations very much. He was a fierce competitor, one of the greats of the game and a creative force. Kobe was also an amazing dad who loved his family deeply – and took great pride in his daughter’s love for the game of basketball.

Grammys opened with a tribute to Bryant

Pop star Lizzo opened the show, and dedicated her ballad “Cuz I Love You” to Kobe: “Tonight is for you Kobe.”

Show host Alicia Keys dedicated the show to Bryant, and along with Boyz II Men she did an acapella version of “It’s So Hard To Say Goodbye.”