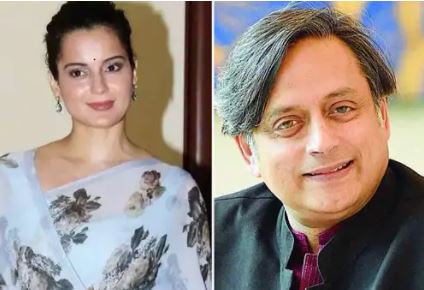 A debate sparked between Congress leader Shashi Tharoor and actor Kangana Ranaut over actor-turned-politician Kamal Haasan’s Makkal Needhi Maiam’s (MNM) proposal for monthly salary to homemakers. While Tharoor appreciated the idea, Kangana said women and their effort should not be given a price tag.

Proposal for monthly salary to homemakers in the election manifesto of actor-turned-politician Kamal Haasan’s Makkal Needhi Maiam (MNM) has sparked off an exchange between actor Kangana Ranaut and Lok Sabha MP Shashi Tharoor.

Kamal Haasan’s party proposed recognise homemakers as working professionals in its manifesto to which Kangana Ranaut opposed prompting a response from Shashi Tharoor.

This tweet by Shashi Tharoor saw a response from Kangana Ranaut who said women and their effort should not be given a price tag. Replying to Shashi Tharoor’s tweet, Kangana said, “Don’t put a price tag on sex we have with our love, don’t pay us for mothering our own, we don’t need salary for being the Queens of our own little kingdom our home, stop seeing everything as business. Surrender to your woman she needs all of you not just your love/respect/salary.”

Kangana further reacted to tweets of others on this matter!

Kangana, on the other hand, while replying to another user on Twitter said, “It will be worse to reduce a home owner to home employee, to give price tag to mothers sacrifices and life-long unwavering commitment. It’s like you want to pay God for this creation, because you suddenly pity him for his efforts. It’s partially painful and partially funny thought.”

Kamal Hassan in his party manifesto last month had promised a monthly salary for homemakers. He also promised to provide a computer with high-speed internet to all households if his party was voted power in the Tamil Nadu Assembly election.