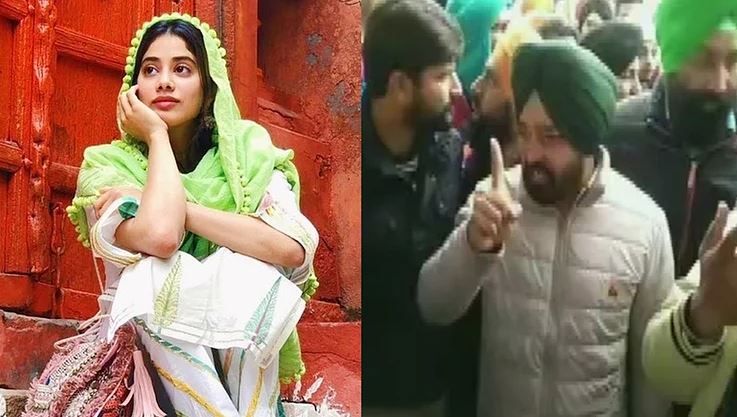 A group of protesters agitating against the contentious agriculture laws on Monday, disrupted the shooting and demanded the actor make a public statement supporting the protesting farmers.

Actor Janhvi Kapoor became the target of farmers’ anger while shooting for her upcoming film Good Luck Jerry was briefly disrupted on 11 January after farmers’ groups gathered at the location in Bassi Pathana in Punjab’s Fatehgarh Sahib. Some media reports have suggested that the crowd refused to let the shoot continue until they were given assurance that Janvhi Kapoor would speak in favour of the ongoing farmers’ protests.

However, the film’s producer told the media that the crowd had directed its anger at Bollywood at large, rather than Janhvi, and had criticized celebrities for staying silent about the ongoing protests against the Central government’s new farm laws. They added that the situation has now been brought under control.

Jhanvi Extended Supports To The Farmers

Earlier this week, Janhvi joined a long list of celebrities who have stood in support of the farmers protesting at the borders of Delhi against the Centre’s three new farm laws.

The ‘Dhadak’ actress took to her Instagram and said that the farmers are “at the heart” of our country. Janhvi said she “recognises and values” the role that they play in feeding our nation.

“Farmers are at the heart of our country. I recognise and value the role that they play in feeding our nation. I hope a resolution is reached soon that benefits the farmers,” she wrote.

Why Are Farmers Protesting?

Braving the cold and rains, thousands of farmers, mainly from Punjab and Haryana, have been camping at several Delhi border points, demanding a complete repeal of the three farm laws and legal guarantee of minimum support price (MSP) for their crops.

Enacted in September last year, the three laws have been projected by the Centre as major reforms in the agriculture sector that Government claims would remove middlemen and allow farmers to sell their produce anywhere in the country.

However, the protesting farmers have expressed that the new laws would pave the way for eliminating the safety cushion of the MSP and do away with the “mandi” (wholesale market) system, leaving them at the mercy of big corporates.

Supreme Court on Tuesday ordered a stay of the implementation of the three new farm laws hoping this will end the prolonged protests by the farmers and also constituted a four-member panel of agriculture experts to resolve the impasse between their leaders and the Centre.