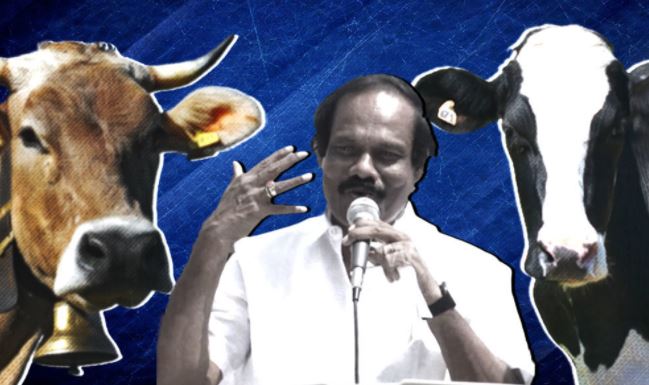 DMK candidate Dindigul Leoni made an offensive remark against women during his recent election campaign. He likened women to cows and added that they have become fat by drinking the milk of foreign cows. Because of this hideous comment, he is presently facing the wrath of netizens as a video clip of his speech has gone viral on social media.

Dindigul Leoni is known for making offensive remarks about women and this time, he has outdone himself when he ridiculed women for their shape and weight.

While campaigning for the DMK, he said “women have lost their shape” and “increasingly look like a barrel”.

In the video, Dindigul Leoni has been seen making these remarks along with the hand gestures to top that. Dindigul Leoni said, “Women are now drinking milk from foreign cows, which is the reason behind them putting on extra kilos.”

He then went on to say that women used to be “thin and their hips would have curves”.

“In a cowshed, people use a milking machine for foreign cows. These days, women drink milk from foreign cows because of which they have put on weight. Those days, a woman’s hip resembled the number 8 [had curves]. When she lifted her child, the little one stayed put on the hip. But now they’ve become like a barrel because of which women cannot carry their children on their hips,” Dindigul Leoni said.

A member from the party tried to interrupt him but to no avail.

Leoni was too interested in making comments about the appearance of women and was not deterred by the interruption.

Gayathri Raguramm, president of the BJP’s Art and Culture Wing, shared the video and called it disgraceful.

“What a shamewhat milk does he drink? Does he know what happens to women’s body post pregnancy or during hormonal changes? @KanimozhiDMK what do you like to say to this kind of male chauvinist? Is this the respect your party people have for women (sic),” she wrote.