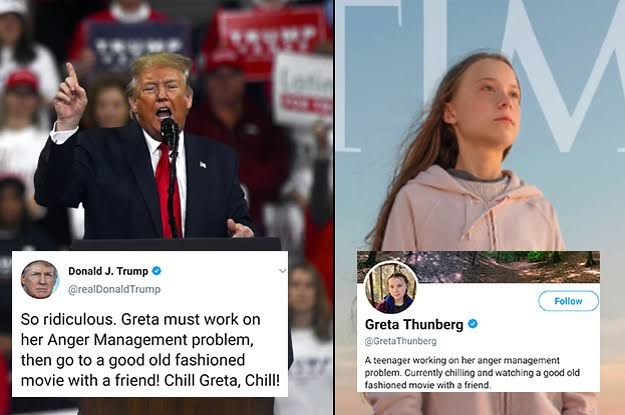 As the 16-year old Greta Thunberg became the youngest person ever to be declared as TIME magazine’s person of the year, Donald Trump and many other world leaders are not pleased. Greta was also nominated for the Nobel Peace Prize.

Greta Thunberg came to limelight after her speech at the UN Climate Change summit where she slammed the world leaders for using “creative PR” and not taking any real action.

Donald Trump has started letting his frustration out as Greta Thunberg became the youngest person ever to be nominated as TIME’s person of the year since they first started it in 1927.

As it turns out, Trump was one of the nominees for the TIME’s person of the year and he didn’t win. US President, who has attacked Greta in the past, called the TIME Magazine “ridiculous” in one of his tweets.

Then he said Greta needs to “work on her anger management problem.”

So ridiculous. Greta must work on her Anger Management problem, then go to a good old fashioned movie with a friend! Chill Greta, Chill.

Greta Thunberg replied to Trump in the most hilarious way possible

Greta then just paraphrased Trump’s advice and made it her twitter bio, as Trump asked her to work on her anger management and catch an old-fashioned movie with a friend, she wrote the this bio:

A teenager working on her anger management problem. Currently chilling and watching a good old fashioned movie with  friend.

In the past, Greta has trolled Brazilian right-wing President Jair Bolsonaro as well

After her famous UN speech, where she said that the Brazilian tribes native to the Amazon rainforest were being killed by Brazilian government, the Brazilian President Jair Bolsonaro was outraged and called her the Portegeuse word “Pirralha” – which means brat.

Then Greta changed her twitter bio to “Pirralha” as an awesome trolling response to the Brazilian fascist President.

When the Russian President called her “a kind but poorly informed teenager”, she changed her bio again.

When Greta gave her famous speech at the UN Summit and said that she’d “never forgive the world leaders” for letting the younger people down and taking away our promise of a better future – Trump made a sarcastic comment on Greta and said:

She seems like a very happy young girl looking forward to a bright and wonderful future. So nice to see.

Donald Trump has been obsessed with TIME magazine since a long time. In 2012, he complained that magazine did not include him in the top 100 people of the year ever, and in 2016 he won it because of his presidential win in US election.

In 2017, he said that the TIME magazine wanted to choose him again but he refused. TIME denied the claim and made fun of Trump for hanging fake TIME covers in his room and at his golf course with his face photoshopped on them.