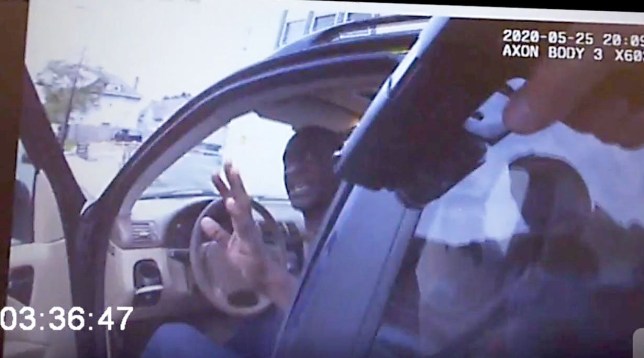 Police have finally released the body cam videos from the George Floyd incident, and it shows things from the perspective of the cops where they killed George Floyd.

The videos show most of what we already know, George Floyd begging for help and calling for his mother in his final moments. But the videos also reveal something sinister which we would expect from cops anyway.

This is what the video shows

Cop Thomas Lane is seen attacking George by pointing a gun at him while he asks him to get out of the SUV. As George steps out, the cops push him to the ground while taking him to their squad car.

They push him to the ground and then they say to him, “Stop falling down.”

They throw George on the pavement and kneel on his neck

The body cam videos from another rookie cop Alexander Kueng have been posted by Daily Mail. These videos show that George Floyd requested the cops to put him in front of the car instead of the back since he was claustrophobic and had difficulty in breathing.

But then they pull him out, throw him to the pavement as Derek Chauvin puts his knee on his neck, and starts strangling and suffocating him.

“I can’t breathe,” Floyd repeats as Derek Chauvin kills him.

The court is hiding the other bodycam videos

Now the body cam videos show that a crowd was gathering around as Kueng checks George’s pulse, but there was none.

Note that these videos were prohibited by the court to be released in public, but as they have been leaked in public and now court has ordered an investigation.

The American court is still hiding the bodycam video of Derek Chauvin, the main killer cop, and would not let it be released in the public. Can you guess why?