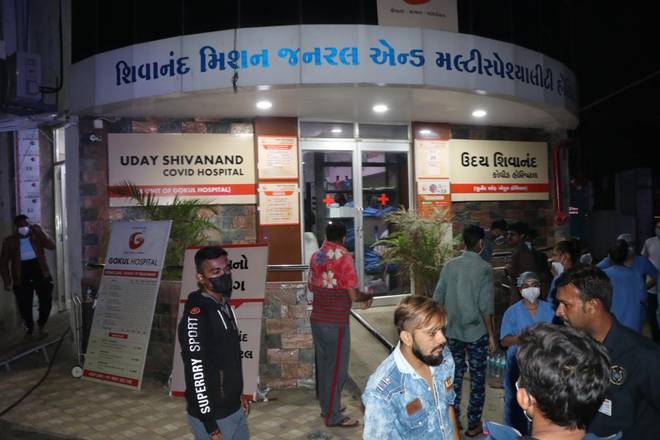 Since the COVID-19 virus has entered India, it has flipped everyone’s lives upside down. There are 9.3 million cases and 136k deaths due to the novel coronavirus.
At a few places where the effect of this virus was a bit low some other disaster happened which caused the loss of life.

Five COVID-19 patients were killed and six others injured after a fire broke out on Friday at the intensive care unit (ICU) of a private hospital in Rajkot. The injured have been shifted to another hospital.

The fire broke in the ICU ward of The Uday Shivanand hospital, a designated COVID-19 hospital in Rajkot city.

According to reports, as many as 11 patients were inside the ICU at the time of the incident. While six out of 11 patients in ICU were saved, the other five lost their lives.

Reports further stated that the fire might have broken out due to a short circuit on the second floor of the COVID hospital.

While local authorities have good reason to believe that the blaze started from the ICU, the cause of the fire is yet to be ascertained.

The Rajkot fire department has managed to control the blaze while all patients have been relocated to another hospital.

The fire broke out in the ICU of Uday Shivanand Hospital in Mavdi area, where 33 patients were admitted, around 1 am on Friday. “We rushed to the spot and rescued 30 patients after a call informing about the fire was received. Three patients died inside the ICU,” fire brigade official JB Thevasaid told PTI.

A similar incident took place in August where eight COVID-19 patients were killed after a fire broke out on the top floor of a four-storey private hospital in Ahmedabad.

Government Mourned Over The Loss

Prime Minister Narendra Modi on Friday also expressed his deep pain at the loss of lives due to a fire in a Rajkot hospital and said the administration is guaranteeing all possible assistance to those affected.

“Extremely pained by the loss of lives due to a hospital fire in Rajkot. My thoughts are with those who lost their loved ones in this unfortunate tragedy. Praying for a quick recovery of the injured. The administration is ensuring all possible assistance to those affected,” the Prime Minister’s Office tweeted quoting Modi.