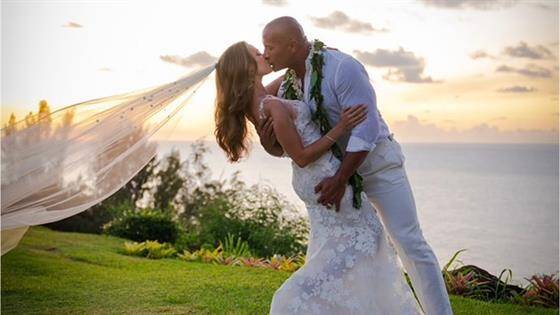 Does anyone need to know how romantic Dwayne Johnson really is? Well, unless you’ve been shipwrecked on an abandoned island for years, it’s pretty obvious how romantic he is. And if you do actually not know much about him, this is your cue.

Dwayne and long time girlfriend Lauren Hashian just got married in a low key initmateceremony in Hawaii. The hit wrestler turned actor, posted a picture of him and his wife on his instagram page. That’s how the world got to know. And my oh my, aren’t you all still reeling from this guy’s romantic geatures.

Dwayne disclosed in an interniew the most romantic thing he ever did for his wife.
After being crowned the “Sexiest man alive in 2016 by People’s Magazine, the “Rock” spoke about his soft side.

I was in the kitchen one morning, and we were talking about Percy Sledge—[he sings] ‘When a man loves a woman,’” he said at the time. “And Lauren goes, ‘Oh! I love that song!’ And then before we went to bed, I called her into the bedroom, put my phone on, hit play, and it was that song. And we slow-danced. On the romantic chart, that might be up there

Dwayne and Lauren Hashian met in 2006 while filming for The Game Plan. The duo began dating each other by 2007 and have been together ever since.

Speaking of couple goals, Dwayne and Laurens adorable lot, Jasmine and Tiana have flooded the stars instaram page. The man is a true gentleman who loves his family to the core.

While Lauren and Dwayne have been together for more than a decade and share two daughters, Dwayne had been married earilier to Danny Garcia. He shares a daughter with his ex-wife, Simon Johnson.

I was so fortunate to have fallen in love once,” said Johnson. “To fall in love again? That’s a hard thing to do twice in the position I’m in. I’m one lucky son of a bitch.

-Dwayne Johnson on finding love again after his divorce

There was a post-Dwayne made on his Instagram page a few months earlier, where he spoke of how much he loves his daughter. He said he loved the fact that she has her mother’s eyes.

Dwayne is currently working with Emily Blunt on his new Disney Venture, Jungle Cruise. The actor made headline last year when rumors of him being paid a whopping $17 million more than the award-winning actress Emily Blunt, came out. Well, while controversies were ripe regarding gender discrimination and industry bias, the co-stars seemed to share no bitter water between them.

Johnson made headlines again when he gifted his mom a beautiful house last Christmas. Her reaction went viral and obviously, the rest of the world was just “awws” and “omg” regarding this.

This one felt good. Surprise! Bought my mom a new home for Christmas. All our lives growing up we lived in little apartments all across the country. Lived like gypsies on the road from one state to another. The first home my parents ever lived in was the one I bought for them in 1999. They divorced about 5yrs later and as with life, stuff happens and things got a little complicated. Since then I always made sure my mom and dad have everything they’ll ever need – houses, cars etc. But the house this time is a special one and the timing is very meaningful. I told her to treat this card like it’s “Willy Wonka’s Golden Ticket” because she gets to choose any home she wants – anywhere she wants. I always say, if you got a good mama, then you gotta pretty good shot at becoming a decent human being. And somehow, somewhere along the line I became one lucky SOB to be able to make stuff like this happen. Merry Christmas Ma and WOOOHOOO enjoy your new home. Dwanta ??

Well, what can we say, except for Mahalo Dwayne Johnson for showing us all that people like you still exist. And how can we not be happy for this fairytale beginning to Johnson and Hashian’s married life!