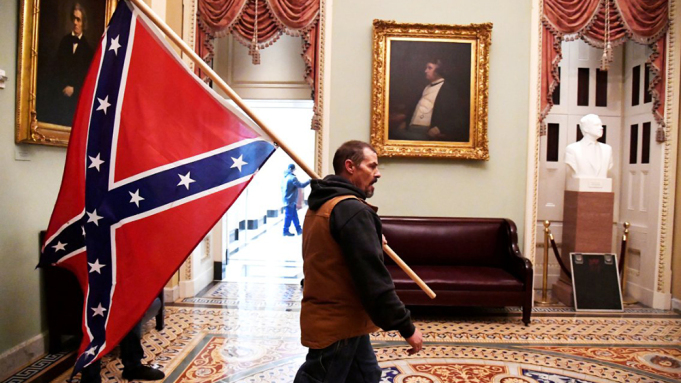 In a bizarre but unsurprising turn of events, a huge crowd of Donald Trump supporters has assailed the Capitol and attempted a coup.

It was a crowd comprising of white supremacists with Confederate flags, Proud Boys, and others from the Trump supporter demographic who overran the Police, broke windows and entered the Senate.

They blocked the election results from being certified

This coup was attempted at the precise time when the Congress was going to certify the 2020 presidential election, officially recognizing the defeat of Donald Trump and the victory of Joe Biden. Assailing crowd shut down both the chambers of the US Congress and took over the Senate floor.

Current Vice President was also under threat from the Trump supporter crowd as he had already made clear that he won’t be supporting the coup. He had to be escorted away by the Secret Service to a safe location.

For now, they have successfully blocked the election results from being certified.

What was the Police doing all this while?

When there are peaceful protests over the murder of an innocent black person, riot police run their cars over people and drive tanks through their streets.

When white ppl storm the capitol with pipe bombs and AR-15s, the police take selfies with them.

We all remember the turmoil of 2020 that followed after George Floyd was murdered by the Police. As Black people had come out to march and protest for basic human rights and demanding an end to racial discrimination – the Police had handled the protests with brute violence. Black people protesting for their rights were beaten up, many of them were shot and killed by the Police. Police had also used a dangerous sound cannon to disrupt crowds, along with tear gas canisters, electric batons, and water cannons.

But when it was the white supremacists assailing a democratic venue to execute a coup and install a ruler who lost the election – the Police backed away and let them do their thing.

Donald Trump is directly responsible for this

Please don't act surprised. Mental health experts have been warning us of a day like this for some time. @realdonaldtrump has been inciting and encouraging violence among his supporters for over 4 years now.

The 25th Amendment must be invoked to remove him from office. pic.twitter.com/TcKmJeLcrU

Donald Trump himself could be deemed responsible for this turn of events – since he had already hinted towards a coup if he lost. And he’s always been supportive of political violence. And he even encouraged his violence from his supporters.

Even in 2016, he had said that he would not accept election results if he lost.

He was constantly talking of a rigged election, and biased media, and a Deep State conspiracy to convince his supporters that something was going wrong. Eventually, the eruption of that emotional manipulation has come forth.

Related tags : Coup in US Domestic terrorism in US Trump insurgency White supremacists