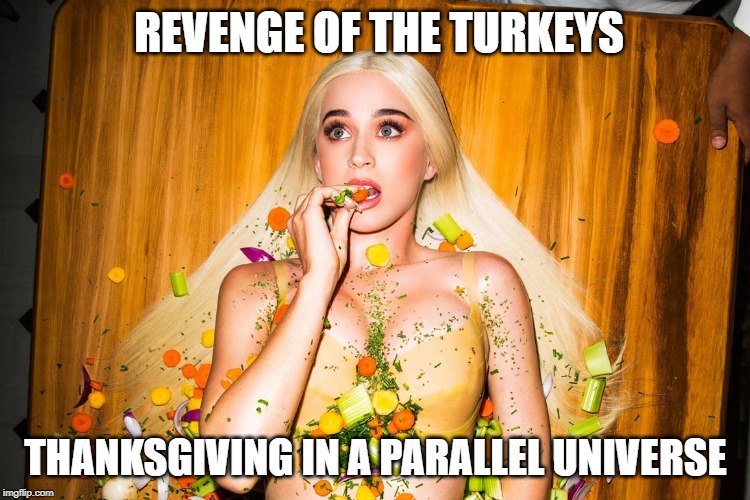 While Thanksgiving is a time for fun and festivities for some people, and a day for the Wampanoag and Pawtuxet tribe of Native American people to remember the tragic incident of 1637 that marked the beginning of ethnic cleansing and genocide. (I’ll take y’all into all of that some other time.)

For most of us, it’s a day when families get together, and they begin asking you questions about your career and studies and savings, and about your plans for the future. Phew! Tough times, isn’t it?

We have collected some very relatable Thanksgiving memes to help you get through the day, with some laughter and some smile.

#1. Donald Duck has now become one with the Turducken

#2. Turkeys know exactly what to be thankful for

Not the vegans, not the people who eat gluten-free, non-GMO, organic stuff. Nobody is thankful for such people.

#4. Turkeys are intelligent after all

“No, they are ugly, stupid, and delicious!” – Joey Tribbiani

Well, since Turkeys figured out something is up a day before Thanksgiving, Phoebe wins.

#6. Quickest way to start a fight on Thanksgiving

Or better yet, eat the whole pie secretly. Leave some crumbs on your mouth and shirt. Claim you never saw the pie, you didn’t even know there was a pie.

This situation is dangerous and risky to get out of, unlike the staged “crisis situations” of Bear Grylls the Discovery channel.

Jokes aside, divide the chores and do your part. Moms do a lot of work, well, most moms.

#10. If I had a penny for every time this happened

When you open the door, the little cousins be like: Do you got games on your phone?

#11. To be fair, Katy Perry did this to herself

Her “Bon Appetit” video might have raised some eyebrows, but her bathing in flour and getting seasoned with a liberal helping of vegetables gave rise to this meme that I’m thankful for.