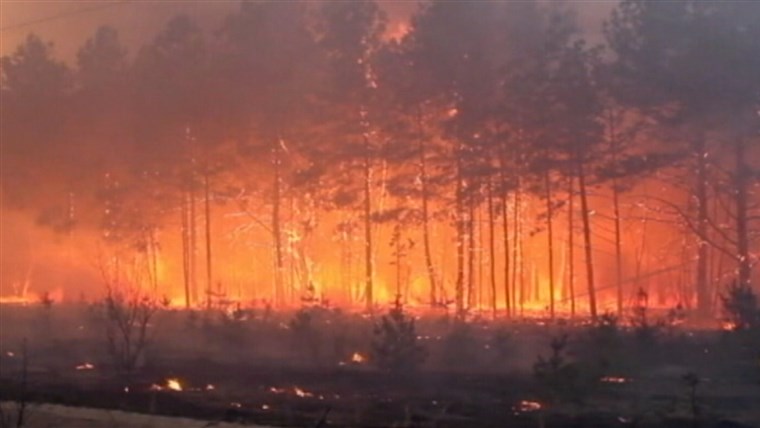 It’s been 34 years since the Chernobyl nuclear disaster happened, but the area nearby is still an exclusion zone with dangerous levels of radiation.

During recent days, a fire broke out in the Chernobyl forests in an area of 50 acres, which the firefighters are battling day in and night out.

Firefighters have reported that radiation levels in the area have been increasing sharply as the fire continues to raze the forest.

Fires broke out from an unknown source, and radiation increased by 1600%

On Sunday afternoon, the fires broke out near the village of Vldimirovka which is inside the Chernobyl’s exclusion zone, and the firefighters are still struggling to put them out – according to Ukrainian emergency services.

Egor Firsov, who is the head of Ukraine’s ecological inspection service, has expressed worry about the rising radiation levels.

“There is bad news — in the center of the fire, radiation is above normal,”

He uploaded a video on Facebook, and said that he was worried about the radiation increase to the 1600% of the normal level:

“As you can see in the video, the readings of the device are 2.3, when the norm is 0.14. But this is only within the area of the fire outbreak.”

While the highest permissible radiation level is at 0.5. So this is still 500% greater than the acceptable levels.

Two aeroplanes, one helicopter, and 124 firefighters are battling the fires

Total 124 firefighters along with a helicopter and two planes are constantly at work, trying to put out the fires. Even after 42 water drops on the area, the fires haven’t subsided.

At another region nearby, another fire has cropped up where 14 firefighters are engaged.

Will this radiation spread to the nearby cities?

The authorities have said that the spike in this radiation level is only limited to the fire-stricken area in the Chernobyl exclusion zone and other cities are safe from it, for now.

This place is located inside the Chernobyl exclusion zone

Vladimirovka is a village that is situated inside the 1000-mile exclusion zone of Chernobyl which was deserted after the Chernobyl Nuclear Plant explosion of 1986. Considered to be the biggest nuclear accident in history, it had affected millions with its harmful radiation while the nuclear fallout had spread all over Europe.

Why is the radiation increasing along with the fire?

In the coming 34 years, the region was claimed by nature as plants begin to grow and now the forest fires in this area have become a common occurrence. Villagers nearby often set fire to their residual crops or grass in their fields, which then spreads.

“The problem of setting fires to grass by careless citizens in spring and autumn has long been a very acute problem for us. Every year we see the same picture — fields, reeds, forests burn in all regions.”

Although, this is the first time when radiation levels have increased along with the fires, and the connection between these two events remains unexplained.