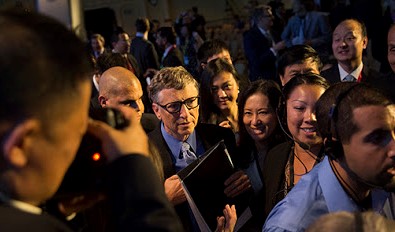 No matter how terrible and disastrous a calamity gets, there will always be people who will make it worse for everyone. And their recent target is not just Bill Gates, but entire science and medical system.

As Coronavirus pandemic has not stopped killing – affecting nearly 2.5 million lives – there are scientists and doctors working for a vaccine.

Bill Gates has been funding such research projects all over the world so that researchers will have enough resources to find a cure and invent a prevention vaccine.

The anti-vaxxers have come hard at him, saying that Bill Gates has a “big sinister and evil plan” to vaccinate the entire world, and that is why he unleashed Coronavirus on the world. Eventually, people will be forced to get vaccinations to save their lives and his “evil plan” will succeed.

Proof? They say that Bill Gates has been talking for many years about how the world is not prepared to handle a large-scale disease outbreak. He has been talking about how the medical facilities don’t have enough staff or equipment, and the logistics system is not up to date with the needs of the growing population, and that even the Governments are inept and incapable to handle a disaster of this level.

Right-wing leaders and famous personalities are attacking him

“Looks like your #coronavirus fame has backfired, hardcore. Going to have to pass on any vaccines you’re cooking up as well— but I do wish you well.”

Another right-winger Dorian Yates accused Gates of cooking up a large-scale “evil plan” to vaccinate the entire world, and reduce the population by letting the anti-vaxxers die:

“One day you will answer for your crimes …if you desire population reduction why don’t you start with yourself and your children ..who are not vaccinated.”

“He’s trying to spy on us all”

Another conspiracy accuses him of trying to create a global surveillance system, where Corporations can track you where you are by installing microchips in your neck. Although, they are a little behind the times, don’t you think?

Considering that a global surveillance system already exists while most people willingly broadcast their whereabouts on the Internet, and the rest of us are still on the grid – there is very little left for Bill Gates to do. And even in this case, it is highly doubtful that any corporation is interested in your personal life other than for the reason that they just want to sell you stuff.

Does Bill Gates really own the patent for COVID-19 vaccine?

Despite being a billionaire through wage-theft and stealing the value of other people’s labour, Bill Gates has been instrumental in helping the development of vaccines all over the world. His donations were helpful in eliminating diseases like measles and polio.

This gives rise to the idea that Bill Gates does want the whole world to get vaccinated. But why is that a bad thing?

Another claim has surfaced that Bill Gates already owns the patent of Coronavirus, and he’s going to reap profit from that vaccine. While it’s true that corporations will be swimming in money after they develop and deploy the vaccine – truth is that vaccine is yet to be invented.

Conspiracy theories point the finger at The Pirbright Institute of UK which has been funded by Bill & Melinda Gates Foundation – but the vaccine they own is not for the COVID-19 but for another kind of Coronavirus that affects chicken.

Is Donald Trump the saviour? This right-wing group believes so

In this floundering river of conspiracy theories, an American right-wing group called QAnon has come forward saying that Donald Trump is fighting against “Deep State” that operates like Illuminati and is trying to kill as many people and cause as much damage as possible.

Well, it can’t really be true since it’s really the job of every nation’s war-military industry and global corporations.