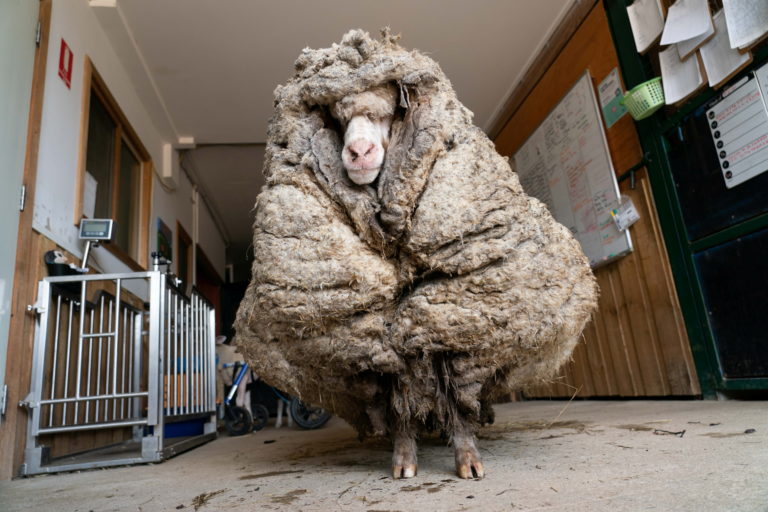 Baba Baarack sheep! Have you any wool? Well…a lot. A wild sheep found in Australia has been shorn of his 78 pounds fleece. The rescuers located the merino ram: Baarack  and shore the overgrown wool coat to save his life.

The Edgar Mission farm sanctuary’s Kyle Behrend revealed that Baarack was “once an owned sheep” and had escaped.

Merino sheep don’t shed their fleece naturally and as their wool continues growing, so they need to be shorn at least annually.

“He had at one time been ear-tagged, however these appear to have been torn out by the thick, matted fleece around his face. He was in a bit of a bad way. He was underweight and, due to all of the wool around his face, he could barely see,” Behrend added.

Baarack is the latest sheep in a queue of very large and woolly sheep that made international headlines. Earlier in 2005, Shrek from New Zealand gained immense popularity for shearing 27 kg of fleece and even New Zealand’s PM paid him a visit.

Barack’s fleece is believed to be equivalent to about 61 sweaters or 490 pairs of socks.

A Shear In Time Saves Sheep

A 35 kilograms lighter Baarack is adapting well. “Baarack has adapted well to his new weight and was settling in with other sheep on the farm,” Behrend stated.

It seems like Shrek’s memories are still fresh in Kiwis’ hearts as TVNZ announced the discovery of Baarack with the headline: “Lost Australian sheep brings back memories of our very own Shrek.”

Another merino ram called Shaun was freed from 23.5 fleece in New Zealand in 2014. An escaped ewe sheep named Ewenice was relieved of her 20 kg fleece after being discovered in central Victoria, Australia.

However, all these star sheep including Baarack are dimmer in comparison to Chris,a Canberran ram who was found in 2005 with a world record 41kg fleece-twice his body weight. Chris’s fleece was donated to the National Museum of Australia, where it is placed in a large display case. After shearing, Chris was adopted to live comfortably in a sanctuary until he died in 2019.