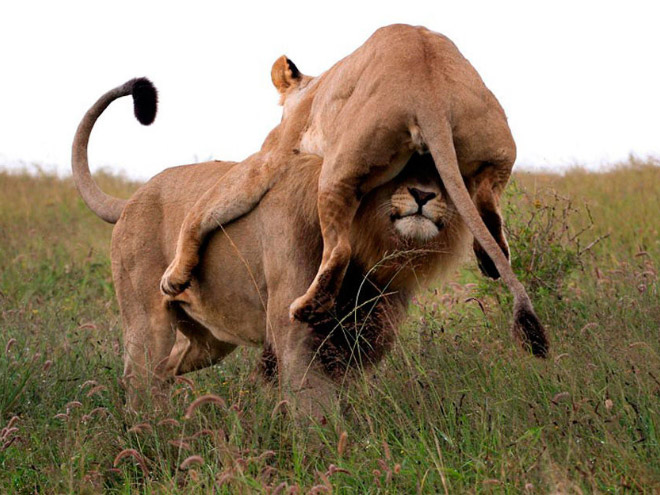 While the human society has Uber and similar systems to hitch a ride, where you need to pay an exorbitant amount to get from place to place.

These animals have found something that takes them wherever they want to go, it doesn’t ask much from them – except for a bit of style, some panache, and a lot of daredevilry.

Here are some photos of the animals who have hitched a ride on other animals, and it’s both hilarious and adorable.

This frog riding a rhinoceros beetle is not just super cute, we can also see how incredibly strong the rhinoceros beetles are. A frog means nothing to this rhinoceros beetle. It can lift up to 850 times its weight, if we humans were capable of that then we’d be able to lift 60,000 kilos.

#2. Can you hurry up? I’m already late by a week for my date

This frog on top of this snail might have found a comfortable seat, but boy, he is going to be so late for wherever he is going.

#3. Praying that this boat doesn’t sink

It won’t sink. Green frogs are extremely adept at swimming and the prayers of the Praying Mantis are unwarranted.

This isn’t technically a ride. Butterflies and bees usually drink crocodile tears, either because of thirst or for salt. To think of it, the 4mg salt in 100gms of your honey comes from crocodile tears. This pug is ready to ride and rumble. 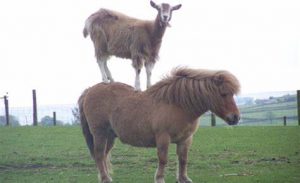 This super cool goat standing on top of a pony is more fearless than most of us will ever be.

#7. Crows are the cleverest birds ever, here’s the proof

Comfortable flight that is fast and free? This crow has figured out all the hacks. Usually, crows quite often hitch a ride on eagles and vultures. Eagles are one of the fastest species ever, and one of them even touches the 400 kph mark. Almost.

“That’s because you keep blocking my sight with your webbed hands, you nasty tree frog.”

#10. A friend in need is a friend indeed

This is a beautiful picture, no explanations needed.

When your kid and your cat both climb on top of you and you just have to sit there. You can grumble if you’d like, but what’s that going to change?

First you give them a ride, then you have to deal with this. Not cool.

That is one tired parent questioning their life choice of having babies. You would too, when you’d have four children sitting on top of you and top of one another, unwilling to get down.

#14. Love comes in all shapes and sizes and positions

I don’t need to explain that, do I?

#15. This plush and fluffy bed

This could be their ride, and their bed. The sheep might mind, though. We’ll have to see.

#16. They don’t call me dragonfly for nothing

Dragonfly riding a snake by sitting on the top of its head is probably the most badass thing you might have seen today. Till now, that is. There is one more photo in this list that is a thousand levels higher.

Baby crocodiles are the first choice for most tree frogs to hitch rides. If you google pictures of frogs riding crocodiles, you’ll get thousands of awesome pictures like that. This one, however, takes the cake.

#18. Frog with heart and nerves of steel

This tree frog and tree snake shocked the internet with the amazing photoshoot where the frog just dangles down on the snake without getting afraid at all, and the snake is quite unbothered.

You won’t, tree frog. You might be badass but you aren’t that clever. Better hop aboard a crocodile.

This is how we were meant to live in this world. Helping each other.

And how patient is the other duck? Although the ring in the brown duck’s leg indicates he has already met humans and has started to pick up some of the human habits already. Freeloading is one of them.

A happy doggo with a proudfaced monkey. Animals riding other animals doesn’t get better than this.