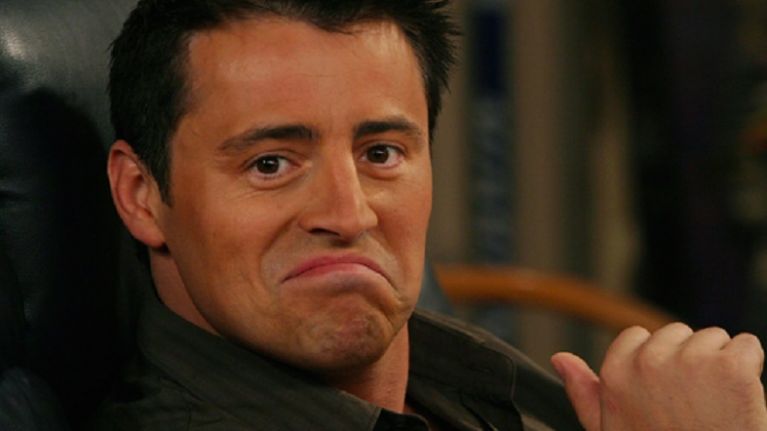 Joey Tribbiani is known and loved by Friends fans for his adorable goofiness, his hilarious mess-ups, and his womanizing charms. While most fans see him as someone who was not the brightest bulb in the bunch – I mean Chandler had the sarcastic wit, Ross was the academic intellectual, Phoebe had the street smarts.

But there were also 14 times when he showed he was actually a low-key genius just hiding behind that pretty face.

#1. Fixes the radiator even when the Super failed

In an episode of Season Two, Ross breaks the radiator knob in Monica’s apartment after which her Christmas party turns into a Sauna. Even the Super can’t fix it.

Everybody is sweating, they are taking off their clothes, and placing their rear parts in the fridge – when Joey just walks in and turns the radiator off from underneath. The solution was so obvious yet no one else thought of it, only Joey did.

#2. When he remembers something from Discovery Channel

#3. Joey figures out Chandler and Monica are dating

That was truly a Sherlock moment, and to be fair to Sherlock it would have taken even some time to figure this out. Both Chandler and Monica tell Joey on separate occasions that they saw Donald Trump waiting for an elevator. Then he gets a call that there was a eyelash curler found in Chandler’s hotel room, and then he hears Monica saying that she lost her eyelash curler.

Well, it didn’t take much time for our little genius Joey Tribbiani to put two and two together.

#4. Understood the complicated game Bamboozled in its entirety

Joey auditioned for this game show called Bamboozled with super complicated rules and gameplay. There were things like Google card, Gimme card, Wicked Wango card, Ladder of Chance, Hopping bonus, and so on. Once he practiced it with Ross and Chandler, he not only remembered it all, he totally understood it.

In his own words: “You spin the Wheel of Mayhem to go up the Ladder of Chance. You go past the Mud Hut, through the Rainbow Ring to get to the Golden Monkey, you yank his tail and boom – you’re in Paradise Pond!”

Once upon a time, an encyclopedia vendor comes to Joey’s apartment and tries to sell him 26 encyclopedias, one for the each letter of the English alphabet. However, Joey has only 50 bucks on him so he gets one that starts with V.

Amazingly, he reads it all, learns all, remembers it all. And now he is able to talk about Vesuvius the volcano, vivisection, and the vas deferens, the Vietnam war, and everything else that starts with V.

#6. When he proved there are no unselfish good deeds

Little did we know that Joey was also a part-time philosopher, and the part of his theory was that there are no unselfish good deeds. If you do something nice for someone else, and if it makes you feel good then it’s just not altruistic. Phoebe tries to prove him wrong by using so many methods, but every time Joey wins with his powerful deduction.

#7. What’s all your furniture pointed at?

When he tells this woman that he is a TV star, she says that she doesn’t have a TV. That takes Joey by shock, he can’t believe it that there are people who don’t own TVs. Then he asks the brilliant question that has been bamboozling interior designers till now.

Ross finds in his anonymous teacher evaluations that there is some girl who has heaped praises on him and indicates having a crush on him. He really wants to know who it is and Joey helps him figure it out.

Joey: Do you still have your final exams?

Joey: Because you can match the evaluations to the exam with the handwriting and boom, there’s your admirer.

Chandler: A hot girl at stake, and all of a sudden he’s the Rain Man.

It’s usually the Ross who corrects other people’s grammar but this time Ross says “who came onto who” and Joey corrects him. Like a boss!

Also, the loving look Phoebe gives Joey at that moment is too precious for words.

#10. Ross screams while Joey plans to climb down the fire escape

When Joey and Ross get stuck on the building roof, Ross panics and starts screaming while Joey calmly suggests that they can go down the fire escape. So much for being the smartest in the group, Ross.

#11. Corrected the stereotypical biases of his friends

Joey acquires a bag which his friends think is rather feminine-looking and start making jokes on him. But Joey stands firm in the defense of what he likes, and shows to them that accessories are not gender specific. As long as you like something and find it useful, you can have it.

#12. Gives sage advice about family and relationships to Chandler

When Janice was confused about whom to choose between Chandler and her ex-husband, Joey correctly points out that Chandler should back out. He tells Chandler that Janice and her ex-husband have a kid together, they’re a family, and they’ll probably prefer to give that a shot and Chandler is just going to get hurt in this scenario.

#13. Asked Chandler to face his fears in the most iconic way possible

Joey: Jump off the high dive. Stare down into the barrel of a gun. Pee into the wind.

Chandler: If I’m staring down the barrel of a gun, I’d be pretty much peeing every which way.

#14. Joey and the Social Worker

And now the smartest thinking Joey has ever done! A social worker comes to Monica and Chandler’s apartment and apparently, Joey has slept with her and never called her back. To save his face he immediately makes up a story about she is the one who never called him, and he kept waiting for her.

When she says that she has given him her number and he was supposed to call her, he says, “You’re a beautiful woman. Smart, funny. We had fun together. If I had your number then why wouldn’t I call you?”

Apparently the sleazeball womanizer Joey is, he knows how flattery can get him a long way with women.