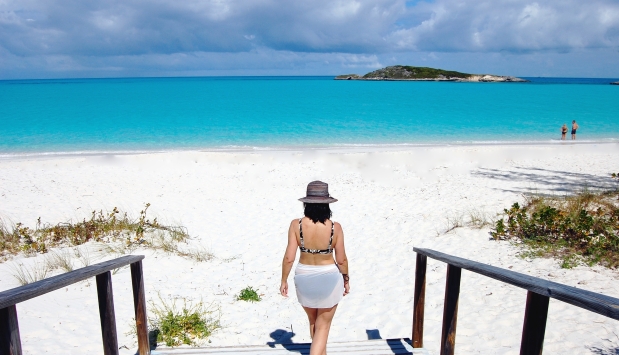 Did you know that while most of the popular beaches in the world are overcrowded and polluted — while there are other beaches, with water clear as crystal, and such a small number of visitors.

We have made a list of the most beautiful beaches in the world with clearest water and least number of crowding tourists.

It’s widely considered as the #1 beach in the US. Located inside a bay, this beach has the clearest water in the United States. Hanauma Bay is a nature reserve that attracts a huge mass of visitors every year. And every visitor is made to watch a documentary about marine life conservation before they enter the bay area.

Imagine walking along a quiet, serene beach, feeling the clear sparkling water embrace your ankles with each wave. There is almost nobody around, probably just a couple of other tourists and the vendors are down the long, dirt road that connects the beach to the nearest town. It’s peaceful here.

You only need to go to Little Exuma island of the Bahamas and find the Tropic of Cancer Beach (also called the Pelican Beach), it may be a little hard to find due to its hidden location. But that’s the trick here, there are very few visitors here because it’s hard to find, but it’s so worth it.

Navagio Beach, also known as Shipwreck Beach, draws tourists due to a mysterious shipwreck that had washed ashore here. There are so many myths and legends about the shipwreck, and people just come drawn to this place to have a look at the shipwreck — and obviously, the vivid blue of the clear, transparent water. On the other hand, the only way to reach here is by the sea.

A hub for almost every kind of water sports, the Elephant Beach has been a longtime favourite among the tourists worldwide. The clear water is perfect for scuba diving, glass-bottomed boat rides, and even sea-walking where you walk on the seafloor while wearing a helmet. You can also try snorkeling, trekking, fishing and seaplane rides here.

Devil’s Bay beach is home to a host of granite boulders which really grant a unique touch to the overall appearance of this beach. The boulders in the sparkling blue water here form so many shapes like arches, tunnels, tidal pools, grottos, and a glorious maze. Imagine taking a dive in the water, and moving through the maze of boulders that are submerged in the water!

This beach from Vietnam is surrounded by a tropical jungle of bamboos and pine trees, that makes you feel like you are in a beautiful isolated spot. Although the road to this beach is muddy and bumpy, and while the ride might be a bit rough — you’ll end up in a beautiful spot with a very small number of tourists and three small restaurants.

Despite being one of the most beautiful beaches in the world, a very few tourists visit this beach every year. In fact, sometimes there are almost no visitors here and the local people along with the native monkeys outnumber the small number of tourists who come here. Ipil Beach is home to vivid blue waters, colourful coral, tall palm trees, and turtles that swim up to the beach often.

Surrounded by the mystical Indian ocean, the Fulhadhoo island boasts of immaculately clear water and a serene ambiance. You can reach here by taking a two-hour long speedboat ride from the Maldivian mainland. Here you’ll find just one hotel and almost no other tourist attractions, and that’s what makes this beach a peaceful getaway from all the rush and noise of the world.

The Port Katsiki Beach literally translates to “Goat Port”, and it was named so because only the goats were able to reach this beach in older times. Now humans can reach there by taking a long narrow road, and then a winding staircase that runs down a cliff. And because it’s hard to get there, very few tourists come here and the ocean water here is uncontaminated by human contact, and we know what that means — brilliant blue of the clear water.

Often rated as the best beach in the world, Rabbit Beach has been the historical home of the ancient Arabs, Greeks, and Romans. You can scuba-dive here to get a glimpse of historic remains that are now underwater. There are also prehistoric huts and rock grottos here to explore.