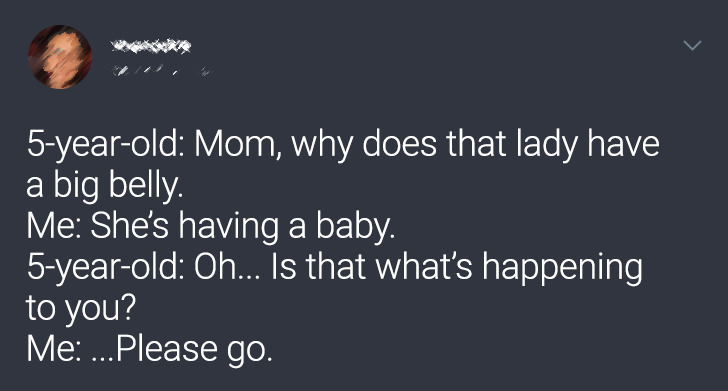 Kids are innocent. They’re clean slate. Everything they learn comes from what we teach them. Sometimes, they even pick up things from other environments like at school and among friends. Nonetheless, when they are old enough to understand why adult life is different than a child’s life. It is during these years that parents take the responsibility to explain what adulthood is like to children, awaiting the questions they’re going to hear in return. But these kids have the most innocent and cutest responses to their knowledge on adulthood. Some of the answers you’re going to hear is going to assure you that there’s no thinking like the way kids do.

1. This kid knows how to let the mom know what he/she thinks of mothers.

2. So, it’s okay if the mother goes to jail. Visiting her at prison is surely better than going to school for this little one.

3. Well, who understands relatives well? Can’t blame the little one!

4. It’s not always about the looks, is it? Kids do not know the difference between good looks and jealousy. Told you, they’re innocent souls!

5. Who says only the old retire? Third graders retire too, okay?

6. The period talk is a tricky one. Now imagine explaining what happens to a four-year-old, and her being worries about… read on!

7. Isn’t he one of the cutest and most thoughtful son, brother, and would-be-husband ever? It’s like the epitome of thoughtfulness and empathy.

8. Wonder what plans this five-year-old had for his lifetime that his parents have clearly ruined by deciding to bring in another kid.

9. A smart move or a scary one? Either ways- she hopefully got the kid to put on some “sunscream” we believe!

10. Ooops, ouch- Now how would one explain the difference between a pregnant belly just another belly to this little one?