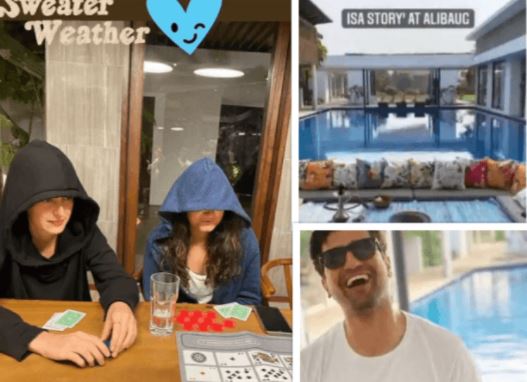 Katrina Kaif and Vicky Kaushal have stayed mum on the status of their relationship for over a year now. But, the ‘Vikat’ fans often dig out small hints and cues of the two being together and going strong.

And, something similar happened when Katrina Kaif shared the pictures from Alibaug recently. The actress had gone to Alibaug to ring in New Year with sister, Isabelle Kaif. And while wishing her fans a happy new year, Katrina Kaif accidentally shared a picture of rumored beau Vicky Kaushal.

On January 1, 2021, Katrina Kaif wished her fans and gave us a glimpse into her holiday pictures. And soon, Vicky Kaushal also posted a picture with his brother Sunny. And, it didn’t take the fans too long to compare the background of the two photos.

The greenery, swimming pool, carpets and vibrant cushions gave it away. Fans were elated to see the pictures and decode how the two rumored love birds had celebrated New Years’ together.

But, the final nail in the coffin was Katrina Kaif accidentally sharing a picture where Vicky Kaushal was visible. In her Instagram stories, Katrina shared a few more pictures and in one of those pictures, Vicky Kaushal’s reflection was easily visible. What’s even more interesting is that Katrina Kaif soon deleted the picture too. Here, take a look.

Vicky Kaushal was seen at Katrina Kaif’s home several times after the lockdown was eased. The two had also been spotted together at some of the parties last year. There has been a strong buzz of the two being in a relationship. Talking about it, Vicky had once mentioned to an interviewer, “I understand that the paps are doing their job. I also understand that people have an interest in our personal lives, by the virtue of us being public figures. That’s fair. But it’s completely up to me if I wish to share. I am not comfortable opening up my personal life for discussion. It’s important to me that I guard the good things.”