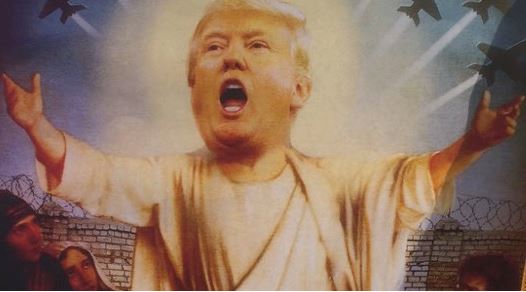 In a bizarre turn of events that have been happening in 2020, and then considering all the bizarre things that Donald Trump has said – this one takes the cake. He has said something that puts all his previous ridiculous statements to shame.

US President Donald Trump just said that COVID-19 is a “blessing from God.”

Recently, Donald Trump was tested positive for COVID-19 and admitted in the Walter Reed military hospital. He was later released from the hospital but his health is still being monitored.

Some people thought that Donald Trump will have a change of heart and perhaps his ego will go away after he fell sick from a deadly virus. But he has come out far worse and is lying even more shamelessly than before.

The first thing that he claimed was that Coronavirus is a “blessing from God” and him catching the virus was actually a good thing.

Mr. President: You attack “socialized medicine” every single day. Well, let's be clear. The excellent care you received at Walter Reed was at a 100% government-funded, government run hospital. For Trump, "socialized medicine" is bad for everyone but himself. Total hypocrisy!

After that, he claimed that he was exposed to experimental treatments at the hospital. This is obviously a big lie, because no hospital would experiment with new and untested medication on the president of the country. He was treated using the verified and tested methods, given the best of care before his health got worse, and he received this all for free.

Trump also promised that the “experimental drug” he received at Walter Reed was for free, and he would make it available free for all Americans.

Was Trump really given an “experimental medicine” that cures COVID-19?

He made this empty promise about a free medicine that doesn’t even exist, while he has taken healthcare away from 30 million Americans.

It’s clear that he is trying to woo voters by bragging about how quickly he recovered from COVID-19, and also by giving them a false hope that any free medicine will be made available at all.

“This was a blessing in disguise – I caught it, I heard about this drug, I said let me take it and it was incredible.”

He kept talking about an experimental antibody cocktail by Regeneron that he was given, and he said that it was the cure to COVID-19. But the medicine has not even been approved yet. Only Trump supporters will be foolish enough to believe that Trump was treated with unapproved and unverified medicine.

Remember when he said Mexico will pay for the border wall?