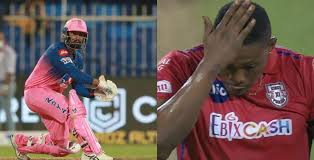 Former Team India opener Virender Sehwag had nothing but absolute praise for Rahul Tewatia from Rajasthan Royals for scoring five sixes in an over and changing the momentum of the game. This was the most epic comeback in the history in the Indian Premier League (IPL).

Tewatia’s 53 off 31 balls handed Royals a four-wicket win over Kings XI Punjab. Rajasthan Royals were required 51 off 18 deliveries.
Shelden Cottrell’s 18th over changed the momentum of the game as Tewatia smashed five sixes in that over.

5 sixes in one over

He smashed the first six over the long leg, second at the short square boundary, third over wide long-off, and fourth over midwicket. Finally, Cottrell got luck and Tewatia missed the slower ball wide outside off. On the last ball of the over, Tewatia smacked a wide length ball over midwicket for another six.

In his innings, he smashed seven sixes and changed the fortune of the game.

How did the fellow players perform?

Earlier, Mayank Agarwal’s maiden IPL ton guided the side to 223/2 in their allotted twenty overs.

“What a redemption. Such is cricket and such is life, changes within minutes,” Sehwag tweeted.

Speaking after the memorable game against Punjab, Tewatia said that he was optimistic about achieving the feat despite struggling in the initial phase of his individual innings. While Tewatia scored a sublime 53, star batsmen Smith and Sanju Samson also played instrumental roles in Royals’ historic win over Punjab in the high-scoring thriller in the United Arab Emirates (UAE).