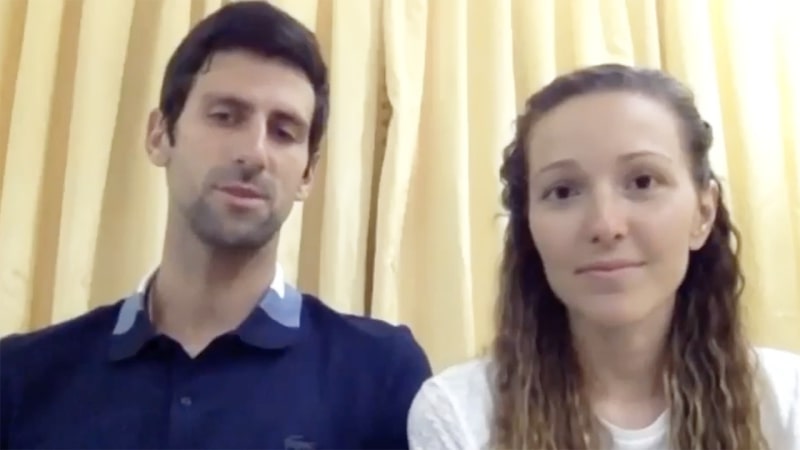 World’s No. 1 ranked men’s tennis player Novak Djokovic has tested positive for Coronavirus after he went to play a controversial tennis tournament.

His wife Jelena has also tested positive, and now the tennis star is drawing a lot of criticism for his irresponsible behaviour.

He was part of this controversial tennis tournament

During the last two weekends, Novak Djokovic was on the Adria Tour which took place all over Belgrade, Serbia, and Croatia.

He played the tournament which was played without any safety procedures or social distancing restrictions, and Djokovic was even seen partying shirtless and playing basketball in his spare time.

Eventually, 4 players from the tournament tested positive and then the final was cancelled.

What about his kids? Are they safe?

Soon afterwards, Djokovic announced that him and his wife have been infected with Coronavirus. Their 5-year old son Stefan, and 2-year old daughter Tara are safe from the virus.

Djokovic said: “The moment we arrived in Belgrade we went to be tested. My result is positive, just as Jelena’s, while the results of our children are negative.”

While Djokovic is being criticized for attending a tournament during quarantine, and ignoring all safety measures while doing so – he has offered an apology. He says that the tournament’s purpose was to unite people and share a message of solidarity and compassion.

While he says that the number of cases in Croatia is still very low, which is why they considered the tournament – even the small number of cases can still cause a sharp spike.

He apologized to everyone who has been infected due to participating in the tournament:

“I am extremely sorry for each individual case of infection. I hope that it will not complicate anyone’s health situation and that everyone will be fine. I will remain in self-isolation for the next 14 days, and repeat the test in five days.”

Still a dangerous tournament that put people’s lives at risk

Which still doesn’t negate the fact that the tournament was played without any rules or regulations for safety – there were no masks, no social distancing, players and people hugged each other, partied together.

Apart from Novak Djokovic and his wife, the other three players to be infected were Dimitrov, Borna Coric, and Viktor Troicki.