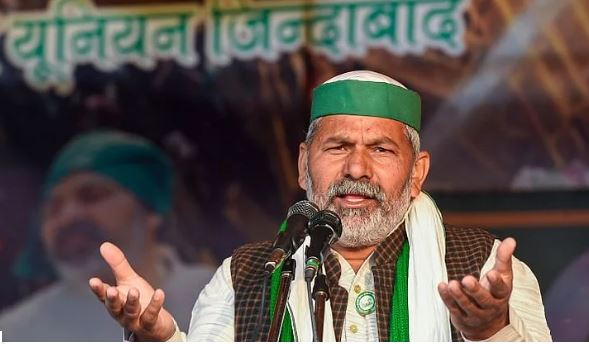 With the surge in novel coronavirus cases in the national capital, the threat of spreading the infection has increased amongst a large number of farmers sitting on protest at various borders of the national capital since the last four months. Even after the rapid spread of the life-threatening virus, farmers are adamant about continuing the protest against the new Union farm laws.

Bharatiya Kisan Union (BKU) Spokesperson Rakesh Tikait has clearly said the farmers’ stir will not end even if a lockdown is imposed across the country. In the last few days, COVID-19 has spread at a rapid pace all over the country breaking all the earlier records. Talking about the surge in COVID-19 cases, Rakesh Tikait told the reporters: “We will not let the Centre make the farmers’ protest another ShaheenBagh movement. Lockdown may be imposed in the entire country, but the farmers’ stir will continue. The requisite COVID guidelines will be followed by the farmers sitting at the protest sites.”

Despite the surge, farmers at the borders are seen ignoring the Covid-19 protocols. The farmers are neither seen wearing face masks nor using hand sanitizers due to which they are at a greater risk of contracting Covid-19.

According to the health bulletin issued by the Delhi government, the total number of Covid-19 cases has gone up to 6,79,962 after 3,548 new cases were reported in the national capital on Monday. The positivity rate, however, is 5.54 percent. This the fifth consecutive day of surge COVID cases in the national capital.

Meanwhile, 11 rounds of discussions have been held between the Central government and the farmers’ organizations so far but the deadlock has not ended yet. Both the farmers’ unions and the Centre have decided to negotiate again but the meeting is yet t happen.

The farmers have been protesting at several borders of the national capital since November 26′ 2020 against the three newly enacted farm laws.

The farmers are protesting against the Farmers’ Produce Trade and Commerce (Promotion and Facilitation) Act, 2020; Farmer (Empowerment and Protection) Agreement of Price Assurance and Farm Services Act 2020, and the Essential Commodities (Amendment) Act, 2020.

Related tags : covid spread among protesting farmers Farmers farmers at the borders are seen ignoring the Covid-19 protocols Farmers bill 2020 farmers covid Farmers Protest Farmers' bill No End On Farmer's Stir Amid Covid Surge Rakesh Tikait stir will not end even if a lockdown is imposed across the country