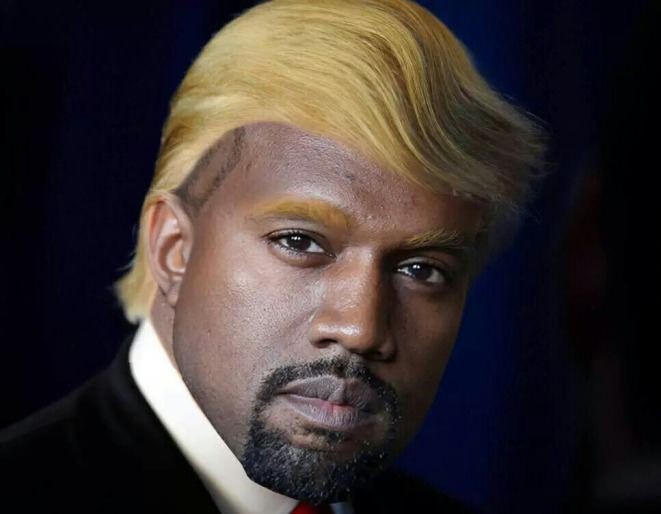 Kanye West, in yet another foot-in-the-mouth fiasco, has claimed things like “one day I’ll be the President of the US,” and called himself “unquestionably, undoubtedly the greatest human artist of all time.” He also confessed that he had become a sex addict after his mother died in 2007, and now he is ordering the people working with him to not have sex before marriage.

The drivel was broadcast on Apple’s Radio Station Beats 1 where Kanye talked to the host Zane Lowe.

For Kanye, it’s just a matter of time before he becomes the President, he has no doubt about it.

There will be a time when I will be the president of the U.S. and I will remember… any founder that didn’t have the capacity to understand culturally what we were doing.

Although nobody has any idea what founder he is talking about.

It is to be noted that Kanye West has always supported Trump and he has even worn the infamous red “MAGA” hat in public. He told Trump that wearing the hat “made him feel like Superman.”

“I am unquestionably, undoubtedly the greatest human artist of all time”

This is the same Kanye who once said that slavery was a “choice.” And now he thinks that him wearing the “MAGA” hat and supporting a racist President is a “God’s practical joke on liberals.”

I’m no longer a slave … I’m a son now, a son of God and I’m free, but this shows you that God is hilarious. Liberals love art and now, I am unquestionably, undoubtedly the greatest human artist of all time. It’s just a fact, right?

In arrogance, cockiness, and narcissism Kanye has outdone even Trump. There is no surprise why he is so sure he can be the next president.

He also revealed he has been a sex addict, but he is ordering others to not have sex

Now he has ordered the people working with him to practice abstinence, and not have sex before marriage. This is perfect, because adult people really need the “greatest human artist of all time” to tell them when to have sex.

Kanye’s plans for America after he comes the President

While politics in America has been pushing towards free healthcare, based on the single-payer system, making sure that everyone gets access to quality medical care regardless of their financial status — Kanye’s focus is on making the medical industry flourish.

In other words, he wants the medical industry to make as much money as possible, while majority of people suffer without affordable healthcare.

Kanye has been an outspoken and devout Christian who says things like “Now that I’m in service to Christ my job is to spread the gospel.”

Ironically, his album refers to Jesus as king, while Jesus’s character was one of the greatest icons of anti-imperialism and anti-establishment. Seems like our Kanye doesn’t know Jesus at all.

There was outrage on his comments about when he said “slavery was a choice”, or when he ordered his collaborators to not have sex, and now he has called himself the “greatest human artist of all time” when his contribution to art is same as Trump’s contribution to intelligence.