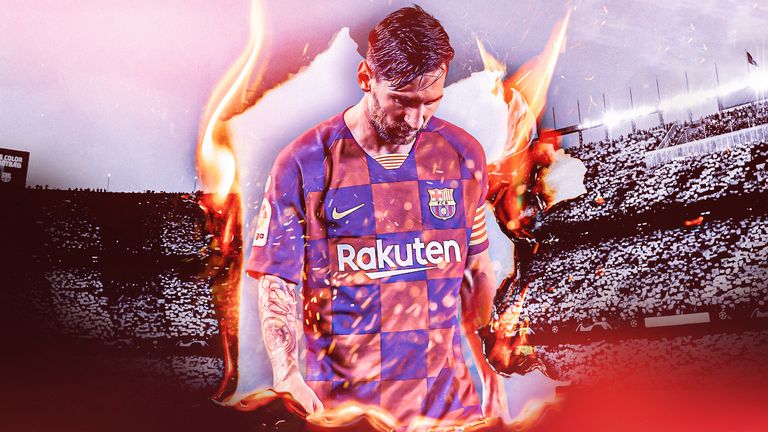 In a news that has come as a shock to Barca fans, Lionel Messi has said that he wants to leave Barcelona. But it seems like he won’t be able to leave even if he wants since he is caught in a legal mess.

According to a report by Forbes, Messi sent a burofax (certified mail that requires the recipient’s signature) to FC Barcelona where he said he wants to leave and he doesn’t want to play the last year of his contract.

Lionel Messi had signed a contract in 2017, that was supposed to last till the 2020-21 season. This was the same deal which made him the highest-earning football player ever. This deal had an exit clause which meant that Messi could leave earlier if he wanted.

But the catch is that he was supposed to notify the club before June 10, 2020 but now the deadline has passed.

This means that Messi is legally obligated and he will be forced to play for Barcelona till June 30, 2021.

This comes after the embarrassing loss against Bayern Munich

It seems that Messi has been wanting to leave ever since Barca suffered an embarrassing loss of 8-2 against Bayern Munich. This defeat put Barcelona out of the contest to win Champions League, and Messi failed to win a trophy for the first time in 12 years.

After that he took a 70% cut in his base pay, and then Coronavirus pandemic ensued.

Many other football clubs are after Messi now, trying to snag him away from Barcelona but the club has said that any other club who is willing to buy out Messi will have to pay his entire $828 million release clause to the FC Barcelona. There are barely any teams rich enough to afford to pay such a hefty amount.

But these are the few teams in the running:

Given that Messi’s most decorated seasons at Barcelona came under current City manager Pep Guardiola, this would be a great move for Manchester City to bring Messi in. On top of that, Manchester City has the budget to pay out the release clause since they are owned by the Saudi royal family, making them the fifth biggest club in the world.

It’s impossible to talk about ultra-wealthy clubs without mentioning arguably the wealthiest. PSG has shown willingness to use its financial might in order to lure high-profile stars to the French capital, and in Neymar, Kylian Mbappe and Angel Di Maria it currently boasts the most expensive attacking trio in the history of the sport.

If money’s the deciding factor, then Messi’s chances of landing in Ligue 1 are extremely high. If it’s not, the opportunity to reunite with Neymar could still influence Messi’s decision — Barca’s recent efforts to reacquire the Brazilian after PSG spent a world-record fee to lure him away from Camp Nou have been in part to placate Messi, who was unhappy to lose Neymar as a teammate three years ago.

This is much more of a Football Manager-style dream rather than a real possibility. For the better part of 15 years, Messi and Cristiano Ronaldo have been considered 1 and 1A in terms of who’s the world’s best player — indeed, they’ve entered the realm of Greatest of All Time with their consistent attacking exploits — so even with both now in their mid-30s, the prospect of the two GOATs lining up as teammates is mouthwatering.

Let’s file this one under “unlikely to happen, but would be amazing if it did.”

It’s always been accepted that Messi would eventually return to his boyhood club at the tail end of his career, and he still might. The problem for Newell’s is that Messi is still performing at a level that affords him the opportunity to walk into the starting lineup of any club in the world, and given his ignominious exit from the Champions League at the hands of eventual champion Bayern Munich, it seems likely that Messi would want another crack at European glory before crossing back into the Western Hemisphere.

He’s already publicly stated that he wants to play “at least six months” for his hometown club, but it’s highly unlikely that six-month stint will come anytime soon.

United is another team that could make the financials work, although whether the current ownership would be interested in doing so is another question.