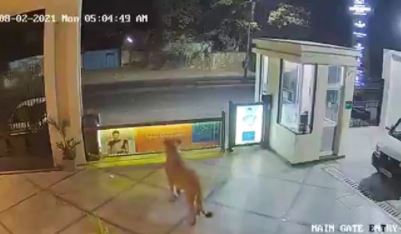 Have you ever heard of a lion checking into a hotel? No right!

An unusual incident that happened in a hotel in Junagadh, Gujarat shows the lion leaping over a low boundary wall to enter the hotel premises in the early hours of Monday morning.

The lion walked around the parking spot and took a stroll around the premises of the hotel as seen in the clips. After a while, the lion leaped over the wall and went outside the hotel. Meanwhile, the security guard sat still in horror in his cabin at the main gate as the lion jumped outside, and moments later, looked out to see the lion walking down the path on the main road.

Soon after the animal was seen, the hotel authorities alerted the forest department. The forest department officials, who visited the hotel later, confirmed the incident. “The lion had apparently strayed into the city after losing its way. It has since returned to the jungle and nothing untoward was reported that night. It is only after the CCTV footage went viral that people in that area are checking footage of their CCTV cameras and are sharing visuals of the lion,” Sunil Berwal, the Deputy Conservator of Forests (DCF) of Junagadh territorial forest division, mentioned.

The footage was shared on Twitter by Twitter user Udayan Kachchhi, who wrote that lions had become a regular feature in the city of Junagadh. Located at the foot of the Girnar Hills, Junagadh is close to the Gir Lion Sanctuary – the last abode of the Asiatic lion in the world.

The same CCTV footage of the lion was shared by Indian Forest Service officer Susanta Nanda, who reminded and underlined the growing cases of human-animal conflict in the state.

Jungadh city is located on the border of Girnar Wildlife Sanctuary (GWLS), a hilly forest which is home to a few dozen Asiatic lions. Population of the big cats has been growing in these protected forest areas and the sightings of the carnivores inside the city have become quite common.

The CCTV footage managed to grab thousands of eyeballs on Twitter and several users shared their thoughts in the comments section.