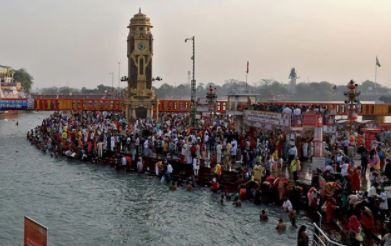 Kumbha Mela 2021: Health authorities in Haridwar, Uttarakhand came as India recorded more than 217,000 fresh cases in the past 24 hours, taking the total figure of new infections to more than two million since April 1.

Mahamandaleshwar Kapil Dev Das, 65, of the Nirwani akhada of of MP, one of the 13 main akhadas, died from Covid-19 complications at a private facility here on Thursday at theMaha Kumbh area. A senior official in the health department confirmed.

The festival of Kumbh Mela has become a hotspot and it could turn into a “super-spreader” as pilgrims return home to their towns and villages all across India.

The enormous crowds of pilgrims — including cannabis-smoking holy men with dreadlocks — taking a dip in the river have mostly ignored official advice to maintain distancing.

Earlier this week, Mahamandaleshwar Kapil Dev Das, 65, head of one of the Hindu akhadas or ascetic councils, was admitted to hospital and died from coronavirus on Thursday, officials said.
“We had around 2,000 positive cases since Monday during random testing of pilgrims at the Kumbh,” Harbeer Singh, a top festival officer, told AFP.
“We are taking precautions and urging people to adhere to coronavirus prevention behaviors.”

The officer said they had ramped up testing at the event’s 600-hectare (1,500-acre) site and insisted they were strictly enforcing government protocols, including requiring negative virus certificates.

Two of the 13 Hindu ascetic councils that are part of the major get-together have now pulled out over soaring Covid cases in the city.

As per reports, more than 25,000 pilgrims were still visiting every day and they were expecting 2-3 million devotees on the last grand bathing event on April 27 before the festival concludes.
The Uttarakhand government has exempted the event from restrictions limiting gatherings to 200 people.

Even after having a complete idea about the situation Chief Minister Tirath Singh Rawat said in early April that no devotees would be “unnecessarily harassed in the name of Covid-19 restrictions”.